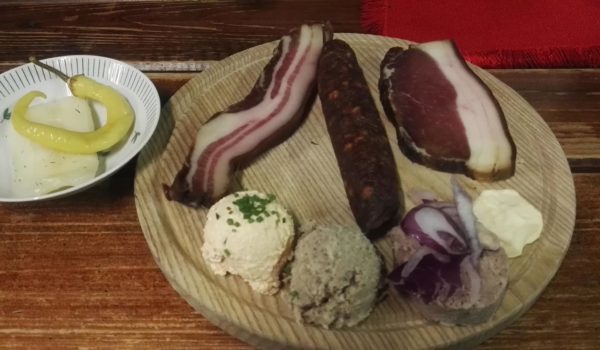 A second Brettljause a day is normally not something one should try unless one is really short of time, for example if spending only two full days in the area. Still, making sure that at least five hours separate the meals, and that those hours are spent burning the calories is a must.

I followed the above rule faithfully, yet anyway regretted going for the “full” Brettljause rather than ordering a smaller version, which was available on the menu. Thus, I resorted to the “dog approach” of starting with the stuff I like most (with the first Brettljause, I normally start by eating the ingredients I like least).

When I returned my plate half an hour later, feeling very full, it contained most of the two liver sausage spreads (who on earth needs two liver sausage spreads?), a bit of the pink, creamy and tasteless spread, and a half of the fat Bauchspeck. I have duly finished the less fat Schinkenspeck and the dry Carinthian Hauswurst. The latter was quite an effort because of its size, but leaving out one of the most important Carinthian specialties while in Carinthia would have been stupid.

As you can see from the picture, this was one on the most unsophisticated Jausen imaginable. Zauchner Mostschenke is also an extremely simple place, which does not mean it’s bad. It is, however, quite far away from the city’s center, and I am glad I made a reasonable decision and switched to drinking diluted cider after the initial “pure” one; otherwise my way back to the hotel could have been much longer and more complicated.