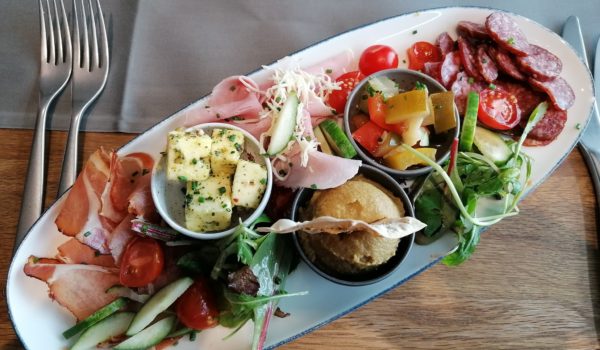 It looks as if some restaurants go to great lengths to conceal the fact that the dishes they serve are in fact Brettljausen. Das Fritz is a good case in point. This slightly posh (but without being annoying) restaurant on the shore of the lake Neusiedl has come up with one of the most creative names ever – “Regional Antipasti” – and tried to hide the dish further by burying it in the middle of the starters section of the menu. Come on, you can miss customers like that. You could have missed me, for example, had I not visited Weiden more or less accidentally.

In the case of Fritz’s Brettljause, there is also nothing to be ashamed of. It is quite expensive (like everything else in this restaurant), but extremely well presented and containing quality ingredients. The salami, Speck and ham were all top class, and the small cubes of cheese were so heavily (yet pleasantly) spiced that the taste of the cheese itself was all but unnoticeable. Surprisingly, the dish also included a small bowl of hummus, the first I have ever seen on a Brettljause. I am not sure what was so “regional” about it, but it tasted less “sandy” than the hummus I had tried at oriental restaurants, and that was a good thing. The only disappointment came from the pickles: the sliced cucumbers and peppers had been marinated so fancily that hardly any taste remained in them.

While somewhat smaller than a common Brettljause, the Antipasti of Das Fritz were, however, bigger than what I would have expected from a mere starter.  If you are not particularly hungry, have 12 euros to spare, and enjoy a nice lake view, look no further.