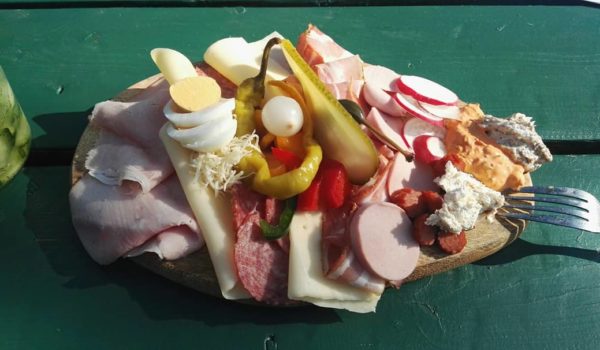 Once upon a time there was a well-known Heuriger called Nierscher. It was located at the very end of Weidling, which is part of the town of Klosterneuburg just outside Vienna. Because of its vicinity, it was reachable via an easy 1.5 hour hike from Vienna’s Cobenzl hill. The walk was especially nice on the first warm days of spring, when Vienna Woods start to wake up, and the smells, the flowers, and the birds’ songs are unrivalled. Nierscher’s other unique advantage was its huge garden, where children had the opportunity to have fun at the playgrounds at the bottom of the hill, while their parents could easily watch over them from their tables higher on the slope while getting pissed in peace. Then, a few years ago, the owners decided to retire, and the Heuriger shut its doors.

Obviously, I was quite happy to realize that now the place is open again under a new name, and – what is particularly exciting – has a Brettl in its menu. There are actually two versions of it: a small one, which I took and a large one (which is probably for sharing, because the small one was fully sufficient for one).

Sad to say, the food offer at Nierscher was better. Although there was no Brettljause, the ex-Heuriger offered very nice plates of small snacks, such as olives, grapes, tiny salamis and hard tasty cheese. They looked fresh and unusual, and were perfect companions to wine. The Brettl of Weidlinger, on the other hand, does not – a couple of lucky exceptions aside – feature anything that one cannot find at a supermarket down the road. The exceptions were a very fat and delicious Grammelschmalz and another hard-to-name spread, tasting like cottage cheese with lots of herbs. The rest – cheese, Liptauer, Extrawurst, ham, salami, Speck and Cabanossi – was highly industrial and rather boring to eat, although the variety of the ingredients has to be commended. I daresay the cucumber salad I took with the Jause was more enjoyable than the Jause itself.

Nevertheless, the Heuriger’s garden is still huge and full of beautiful blooming apple trees, the children are thankfully far enough not to be annoying, and the wine is absolutely drinkable and quite light so that even three quarters of it does not make one too drunk. Regardless of the Brettljause, Weidling remains a must-go spring destination.