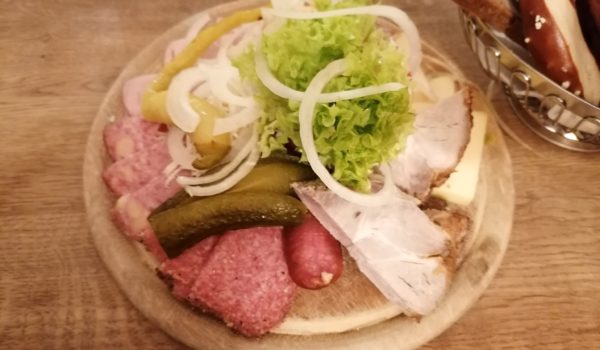 For its size, the Alter Fuchs has at least 20% more tables than it should. The closeness of the tables is almost Parisian. In order to sit down, I had to push my table as far as I could to one side, but even then squeezing myself in was not a simple task. Ok, I cannot call myself slim, but for a location that serves Brettljause, Schweinsbraten, Stelze and other heavy Austrian dishes, the space is prohibitively tight. In fact, I spent all my time in the restaurant fearing the moment when I would have to depart, and left far too high a tip as a result.

The other visitors did not seem to mind, however. They just kept on coming. Had I arrived but 10 minutes later, I would have had to sit at the bar. Perhaps the disgusting rain outside was to blame, but the clientele contained as many Austrians as tourists, with some coming with large families. If you want to visit the Alter Fuchs one day, a prior reservation would not be out of place.

If your main motivation is eating a good Brettljause, however, you would do better searching for other places. The Jause of the Fuchs is big and varied, but very average when it comes to the ingredients. To start with, at least three of them were identical to the ones I was served for breakfast at my hotel. They were obviously bought at the same supermarket. But while my breakfast plate was neatly arranged and decorated, the Brettljause of the Fuchs was nothing but a pile of stuff. Discovering the individual ingredients, to say nothing about separating them, was hard work. I ended up having to chew a weird mess that could only be called Liptauerspeck. The other thinly cut sausage types also appeared to be glued together.

The cheese and the Schweinsbraten were served as thick cuts, and although the cheese looked boring (and tasted the same), I did look forward very much to the Schweinsbraten. The first few bites were OK, but then the pig taste became just a bit too prominent. Besides, the slightly pinky color of the meat was off-putting.

The only ingredient that I thoroughly enjoyed was a long smoked pepper sausage. Had it been available alone, with a bit of mustard and horseradish, it would have been a perfect snack for me. The Brettljause was at the end more work than it deserved.