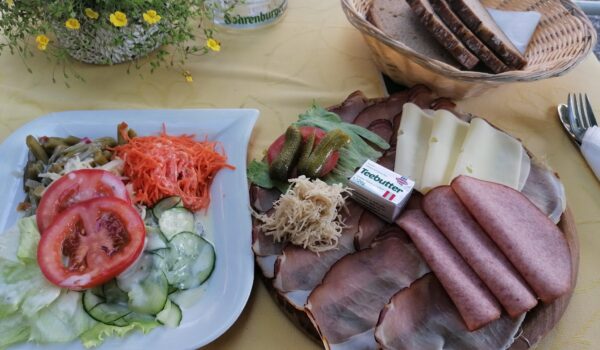 The lake Lünersee is easily one of the most beautiful places one can visit in Austria. The aquamarine of its waters is incredible, the quietness of the landscape, disturbed only by the sound of cows’ bells, is mega-relaxing, and the walking path around the lake is astonishingly beautiful and surprisingly long, especially if one takes a detour and walks up the slope to the border with Switzerland. No surprise that the cable car (which, luckily for me, opened today, on the last day of my holidays, after a lengthy reconstruction) was packed with people.

Regrettably, the two lakeside huts that I checked out did not have a Brettljause. (There was a third one on a nearby mountain, but reaching it required a one-hour climb for which I unfortunately did not have the time.)

The Gasthof Stern, on the other hand, had a Brettljause on the menu. It is located on the outskirts of a rather uninspiring town of Bludenz, notable mainly for its train station, which is where the buses to the Lünersee and other nice places depart from. Although featuring a shady garden (quite welcome in today’s 30°C heat), the restaurant stands next to an annoyingly noisy road, and a stay in the garden, despite proving a glance at some mountain, is anything but relaxing. No surprise that hardly anyone went there on this Saturday afternoon, apart from a few locals and a rather stupid me.

To call this Brettljause basic would be an insult to many seemingly basic things that possess a certain degree of well-concealed sophistication. I could have easily prepared such a Jause for you without thinking. I could have even prepared it for you with my eyes closed, if you do not mind having thin slices of my fingers on the board. That would have certainly made the Jause more varied, for it was 80% Speck, 10% light salami and 10% the cheapest and most boring cheese one could find at the BILLA nearby.

To give it some credit, the Speck was good. Maybe Stern should simply drop the other two ingredients and refurbish its Brettljause as a “Speckplatte.” That would have prevented me from ordering it and subsequently suffering from the condition I call “a waste of stomach space.”