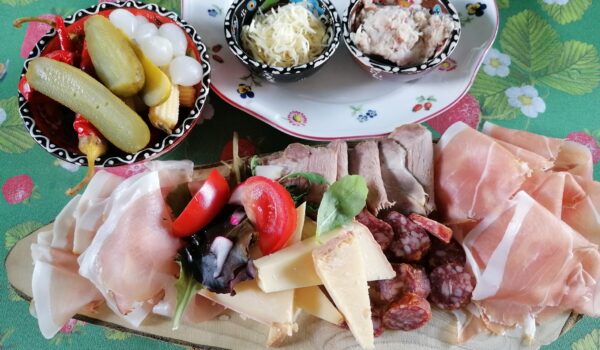 Over the years, I have developed something of a sixth sense for the restaurants that may serve good Brettljausen. Upon arrival at an unfamiliar location, it usually takes me just a few hours to identify an establishment whose appearance I like, and more often than not, it ends up having a Jause on its menu that I enjoy.

In the case of Lech, the 8er Hus struck me straight away as a cozy place to have my obligatory (during holidays) late evening drinks. It was closed on the day of my arrival and full of people the next, rainy day, but I persisted, and on the third day I dined there on the best grilled pike-perch ever. Yes, I was aware of the Brettljause on the menu, but I had already eaten one earlier, and managing two Jausen a day is becoming very hard with age.

Today was the time to try the Brettljause, however, and I made sure to arrive after 15:00, when the chances of finding a spare table were not bad (the Hus is quite a popular place). The presentation was flawless: in addition to the main wooden board with two types of Speck, Schweinsbraten, Hauswurst and cheese, there were three beautiful bowls with the pickles, horseradish and Verhackertes respectively. The pickles, which included small cucumbers, cocktail onions, baby corn cobs and Pfefferoni, were unfortunately industrial, but the Verhackertes had exactly the right taste and temperature (very important for Schmalz and Verhackertes), and the Speck and the Hauswurst did not disappoint either. The Schweinsbraten… let’s simply say they got eaten, with neither good nor bad feelings associated. The cheese, however, was the true king of the Brettl – strong, as one can expect in Volarlberg and of a nice texture, falling apart similarly to Parmesan, yet not as hard.

It was a very competent Brettljause all in all, and should I return to Lech one day (which, if you ask me right now, seems very likely), I do see myself ordering another one. Once I have satiated myself with the pike-perches, of course.