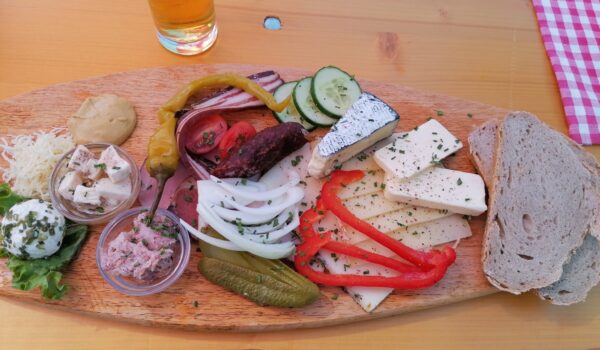 There are two types of mountain huts. First, there are alpine pasture huts, often doubling as snack places for casual hikers. This is usually the optimal destination if you are looking for a good Brettljause, for it is likely that at least a few ingredients, usually cheese and butter, will come from the hut’s own production (and, if you are lucky, the pork will come from a farm nearby). Second, there are the “high alpine” huts, which take ages to reach, and which are used by professional hikers as a night shelter before attempting some crazy climb at dawn.

Generally, finding Brettljausen at such huts is more an exception than a rule, and even if they serve one, I wouldn’t expect much. Fresh food is hard to bring there, and cooking a goulash or a thick soup to last a week is a much simpler and more sensible way to feed hungry climbers than to worry about serving at least five types of sausage and cheese. Thus, if you ask me, any hut offering 36 reasonably clean mattresses to spend the night on can be safely disregarded when searching for local delicacies.

Theodor Körner-Hütte is a rare exception. Probably it’s because it’s not very high up in the mountains; in fact, there is a “hut of the first type” (Stuhlalm) mere 200 meters away but without a Brettljause on its menu for some weird reason. Luckily, the Körner more than compensates for that sad omission.

Saying that the Jause of the Körner Hütte exceeded my expectations would be an understatement. Even considering the number of ingredients (10), the dish was there with the best, but the quality of the ingredients was impressive too. The cheeses had quite a strong taste, and the one served in oil with garlic was one of the most enjoyable I’ve encountered on a Brettljause. The two types of Speck were both very tasty and non-industrial. The Verhackertes puzzled me at first with its bright pink (rather than more usual gray) color, but considering that Verhackertes is supposed to be made by mincing Speck, the color actually made a lot of sense, and the taste was as fresh as it could realistically be.

The hut, though small, has a large sunny terrace, that allows sunbathing while enjoying fantastic views on the impressive Bischofsmütze mountain and the Lammertal valley. If you are staying in the nearby Annaberg, the ascent to the hut is very easy along a wide forest path. If, like me, you are staying in Gosau, the walk from the top station of the Gosaukammbahn is more adventurous and is probably best avoided after a rain, because the path turns seriously muddy and slippery. It’s also worth planning your way back – from my experience, using the same tricky path is preferable to walking down to Annaberg just to realize that the only way to reach Gosau before dark is to climb the same mountain again and the cable car is out of service.