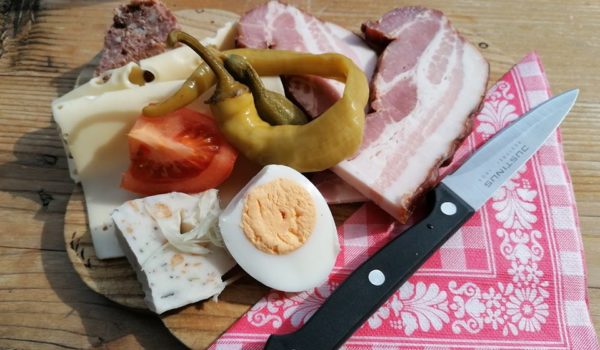 Spending an extended weekend in good old Ramsau am Dachstein was my last desperate attempt at finding snow this winter. And I had my luck: the night after my arrival and the whole next day it snowed heavily, resulting in fairy tale views, nice creaking under my boots and a very wet backpack. Today, on my second and final day of stay, the sun came out, and the snowfalls became lighter and less frequent.

One of them started just as I sat down outside the Jausenstation Fliegenpilz planning to enjoy the warmth of the sun. Sitting outside was a bit of a mad decision anyway, as all the skiers passing by kept on pointing out, but what the hell – at least my beer remained cold. Besides, I did not particularly like the interior of this 450-years-old hut. It actually smelled 450 years old.

The Brettljause was not that old, of course, but must have spent quite some time in the fridge. March is definitely not this hut’s busiest business period, and all the ingredients tasted more of cold than of anything else, but they looked good – thickly cut (the Speck and the salami) and very rustic. What I enjoyed most at the end was a Grammelschmalz, with its pieces of crunchy fat literally frozen into the white fatty paste. The meat spread, which also appeared very authentic, was something I was looking forward to, but its taste disappointed by its total lack. I should be thankful it did not taste of liver, I guess.

The Fliegenpilz must be a much better destination in summer, as a place to have a snack before climbing up the picturesque Silberkarklamm. Today the hut appeared to be just out of its winter sleep, and the lady serving the Jause looked annoyed of having been woken up. Besides, I was faced with a questionable entertainment of watching a dog making horrendous noises fighting fleas (well, I hope it was fleas and not something worse) and some guy throwing old furniture from the first floor’s balcony into the bucket of an excavator. All a bit too rustic for me.