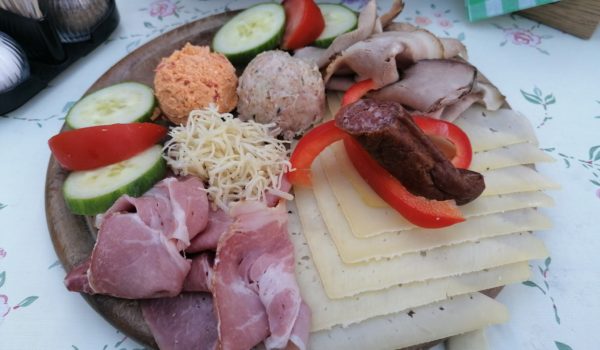 Come to think of it, the Mostschenke Ressenstüberl was the primary reason why I traveled to Bad Aussee in the first place. About a year ago, while hiking on the rather beautiful Tauplitzalm, I saw an inviting lake far below, and having checked Google Maps and the site of Austrian Federal Railways, I discovered that a) there was a Brettljause place on the shore of that lake and b) the place was relatively close for a weekend trip.

As it turned out, Bad Aussee was worth a visit for many reasons. It’s a sweet and not very little town, with beautiful villas, cozy, though overpriced, cafes, green hills, rough mountain rivers and the two most beautiful lakes in the entire Salzkammergut. In these post-COVID, almost tourist-free, times, this place is radiating charm, and there is so much to recommend here that had I tried, this post would have become far too long.

To save time and space, I’m going instead to concentrate on what not to recommend in the area, and somehow the Ressenstüberl comes extremely high on the list. It’s a very basic establishment with no particularly impressive views, and the house that it is in is currently undergoing a major renovation, meaning that there is nothing at all cozy in this restaurant except the cats that hang around for bits of food but immediately run away if you try touching them. I guess even the cats wouldn’t touch the restaurant’s apple cider (the Most), for it can only be described as the most unfair and dreadful thing that has ever been done to an apple. It was so undrinkable, that I had to order some apple juice mixed with mineral water afterwards, just to fight the sour taste. The juice wasn’t much better, but it was better.

The Brettljause was not dreadful; it simply was not good. I’ve managed to get some enjoyment out of the Verhackertes and much less out of the paprika-heavy Liptauer, but the slices of Schweinsbraten and Geselchtes were boring and fat, while the cheese hardly had any taste.

I can’t say I didn’t like the opportunity to take a break after a strenuous walk and get slightly pissed, and the owners were really friendly, but the Brettljause didn’t deserve an attention, and certainly was not worth its more than 10 euros price tag. At least the meats and the cheese were edible, for the cats ate a good third of them. And honestly I am grateful for their kind help.