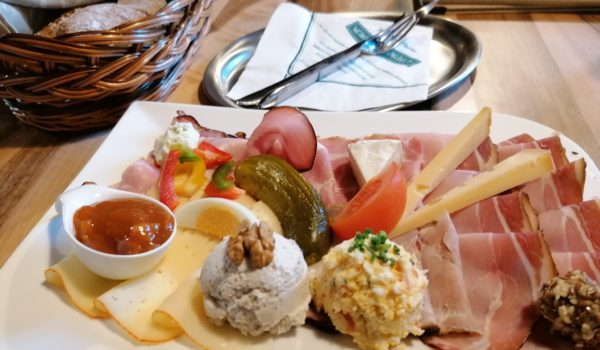 Feuersbrunn is a settlement of two halves. The southern part, which is closer to the railway station, is a typical small village of the Weinviertel with 600-something residents and a long history of wine-making. The northern part, separated by half a kilometer of fields, is a set of Kellergassen, or wine cellar streets, with seemingly more cellars than residents to own them. Heuriger Öhlzelt is located on the Kellergasse, while the Weingut, where the wine is made, is in the village. Keep this in mind, or you risk breaking in a wrong door.

From the outside, the Heuriger looks hardly larger than the cellars around it, but once inside, one gets quite astonished at how spacious and well-maintained – even modern – it looks. The place must be making very good business. I hope it does, because it totally deserves it.

The menu of Öhlzelt contains quite a few kinds of a Brettljause, so in line with one of my unwritten rules I went for the most expensive one. The “Specialties Plate of Wagram” (Wagram being a hill chain next to which the village stands) included two types of spread (an egg one and a creamy nut one), three types of meat and five different cheeses, although the two strongest and best ones were so small that were finished after a couple of bites. The bread cost extra, but was absolutely worth the money, tasting as if having been freshly baked (which might very well be the case). The meats, too, were excellent – each type had a distinct flavor, and I would not be surprised if, had I asked, the owner would have told me the names of the local pigs that they were made from.

The only ingredient that tasted out of place was, strangely enough, the apricot chutney. Supposedly, it was added to go well with the cheese, but in practice it was neither sweet nor spicy enough to underline the cheeses’ taste. If anything, it made the cheese taste worse.

Nevertheless, one lesson I should draw from the beginning of this year is that I must have been unfair to the Brettljausen of Lower Austria. Or, while I was concentrating on the Jausen of Styria, Tyrol and Salzburg, the quality of the Lower Austrian ones has made a huge jump. Öhlzelt is a wonderful little place, and I am looking forward to trying the other Brettljausen from their menu soon.