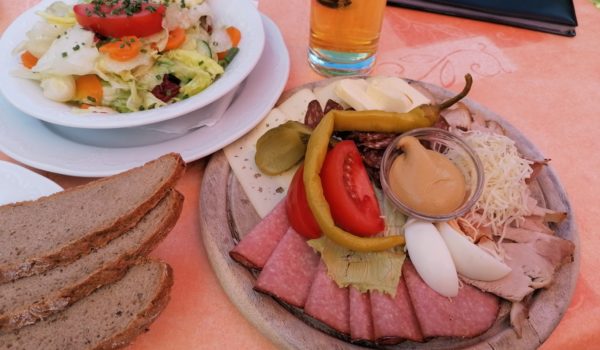 Truth be told, I was not looking forward to another Tyrolean Brettljause. In fact, I had in mind to take a break from Brettljausen in general, but there I was, in a nice sunny hut surrounded by snowy peaks, with the noise of a waterfall behind me, and the heaviness in the legs after walking for almost six hours… It was somehow much easier to order a Brettljause than to explore the menu.

To my delight, the Brettljause did not look East-Tyrolean at all and would not have been out of place at a reasonably good Viennese Heuriger. To be truly Heuriger-ish, it lacked the all-important Liptauer, but then it lacked the obligatory Tyrolean Speck, too, at a first glance. (I discovered it buried under the Schweinsbraten later on, so the balance of the world was restored.)

Everything was thinly cut, making the consumption much easier. I could easily believe that the Schweinsbraten were homemade: I saw “oven-fresh” Schweinsbraten offered in the menu as a separate dish, and it is much cheaper to let the cooked but uneaten Schweinsbraten cool off than to buy a ready-made one at a supermarket. The lightly smoked sausage and the cheese did come from a supermarket, I felt, for they did not bring anything special taste-wise. On the other hand, I did not care where the Speck came from, for the Speck in Tyrol, even the cheap supermarket stuff, is always very enjoyable.

The best part of the Jause was the Hauswurst (the “home sausage”) that, like everything else, came in thin slices. It had such an authentic smoke flavor that had I seen it being sold anywhere, I would have bought it to take home straight away. And I did enjoy the mixed salad that I ordered as a side dish. Recently I am finding salad a perfect complement to processed pig. Is it the first step towards becoming a vegetarian, I wonder? Something deep inside me (my stomach?) tells me that the answer is “no.”