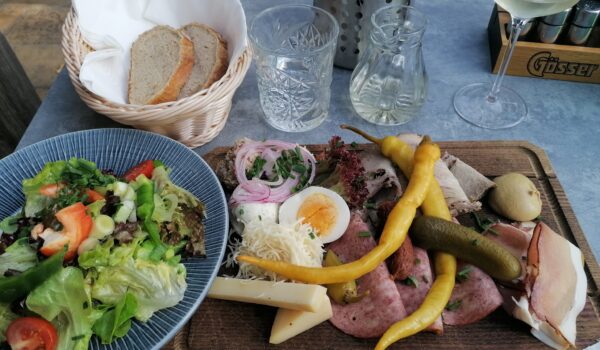 A simple rule of Brettljause-hunting says, “When you see one, eat it.” Unfortunately, hunger does not always cooperate, and my age makes eating without hunger very difficult and may potentially introduce unnecessary bias to my already subjective reviews.

Today I missed an Almjause at a small and very authentic pasture hut near Spital am Pyrhn, hoping to compensate two hours later at the village’s Mostheuriger, which turned out to be closed. These unfortunate events made me search for Brettljausen in Linz all through my train journey, until I found one open and reasonably close to the main station. The restaurant was called “Die Buschenschank” to eliminate all doubts about its purpose.

Now, I must admit I don’t like Linz. The only time I spent a weekend in it, I was fed an old goose, dined on a burger in a shopping mall and spent half a day looking for a Brettljause before realizing it was far outside the city.

Die Buschenschank is, practically, also outside the city, but by 300 meters at most. Its location is also so beautiful that all my previous conceptions of Linz received a huge shake-up. It’s on a hill of sorts, surrounded by vineyards (you don’t see many of them in Upper Austria) and offering a fantastic panorama of the South, where you glimpse some impressive mountains in the distance. The restaurant also features its own friendly cat, which is always a big plus for me. Actually, from my first impressions, I was expecting the Brettljause, steeply priced at 13 euros, to be rather small and very good.

In reality, it was quite large and a bit underwhelming. Visually, it was great, its layout well-designed and inviting. I liked the presence of three types of spread, as well as thickly cut cheese and unhealthy looking Schweinsbraten (for Schweinsbraten, “unhealthy” is a compliment). It is only when I stated eating it, it became clear that the cook either had an unnaturally refined taste or decided not to take any risks and make sure that none of the ingredients tasted too strongly. The creamy “herb” spread and the “potato cheese” were almost indistinguishable in their blandness; the Verhackertes was not shredded finely enough, still revealing bits of Speck and, weirdly, having a slight flavor of liver. The Schweinsbraten, the Speck and the Wiener sausage (replacing the Geselchtes promised in the menu) were good, but not brilliant as my first impressions made me believe. I also struggled with the bread: the two slices, although exceptionally fresh, were insufficient even for the spreads. I wish cooks tried to eat their creations before imposing them on their customers, for such stupid errors would be very obvious.

I realize I sound as if I didn’t like Die Buschenschank at all, and that is definitely not true. It’s a really nice place with a good, but flawed and somewhat overpriced Brettljause. But if you are in Linz, you have no excuse for not going there. It might change your opinion of the city completely.