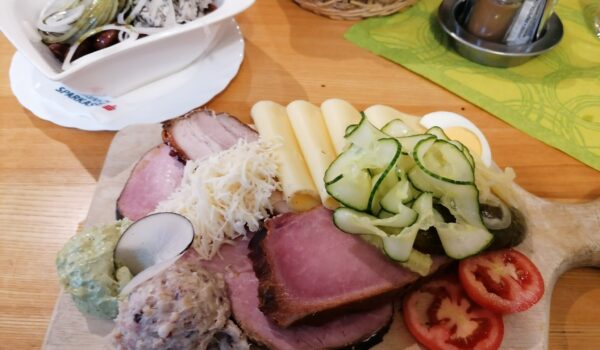 What to do if you end up in a Heuriger that you are not very likely to visit again and see two types of Brettljause on the menu? My solution is to always go for the more expensive one, preferably the one that is not simply named a “Bretlljause.” In Skoff’s case, I took something called a “Wanderjause,” whose price compared to a plain Brettljause was 30 cents higher.

As it turned out, most likely one pays 30 cents for not letting the cook cut the ingredients. The Jause arrived with three huge chunks of meat of it: a rather tough pinkish Speck, a much easier to chew Geselchtes and a Schweinsbraten with easily identifiable (and therefore easily removable) bits of cartilage in it. A bit of extra work was required to cut the skin off the meat slices; while chewable, it did not add anything to the experience.

Apart from the meats, the Jause featured two spreads – a very tasty though oversalted Verhackertes and a green pumpkin seed one, which did not taste of anything but reminded me that I was in the Southern Styria – and a few slices of cheese, which looked like an afterthought. The meats were obviously the main part, and I would be lying if I said they were bad, particularly after the disposal of the annoying skins. There was simply too much of them. Had I a spare hour at hand, I would have stayed longer, ordered even more wine and made sure I cut the meats into small pieces that I could savor before issuing them a one-way ticket into my stomach. Better still, I wish I could have had a friend nearby who could share the dish with me. I can say the same about the runner bean salad, which – while very authentic and welcome – simply had too many beans in it.

Today being a Sunday, the Buschenschank had only locals in it, creating a strange kind of a relaxed atmosphere. In a separate room, a young family with friends was celebrating the first anniversary of their daughter with balloons and a lot of wine. Opposite to me, two couples were busy cutting sandwiches into microscopic slices while yodelling at the same time. At first, they sang really badly, yet as their (and my) drunkenness increased, the songs started to sound almost professional.

If you are sufficiently hungry and need to kill a few hours near Ehrenhausen, Skoff is a perfect, easy-to-reach location. If you are lucky with the weather, consider sitting outside, because the indoor decoration of the tavern borders with dreadful. If I were you, I would also go for the thinly cut “Brettljause,” saving 30 cents and some cutting effort.