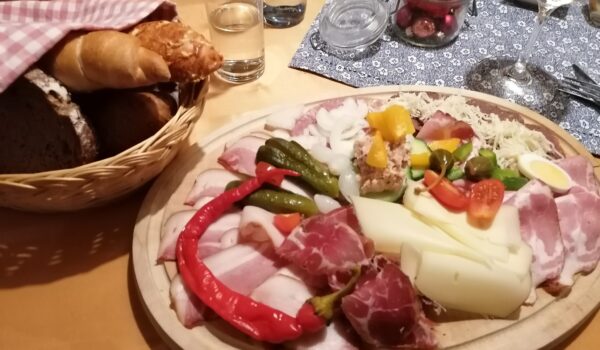 Just one month of lockdown was enough for me to forget not only what it is like to eat at a Heuriger but also the basic COVID-19 regulations. It took me at least a minute of listening to the owner’s dialect-heavy and apologetic-sounding monologue to figure out that all he wanted from me was a proof of my vaccination. In my excuse, I was more than a bit tired at that point. Having left the town of Hollabrunn for a short stroll to the viewing tower on the nearby hill, I took a wrong turn somewhere and had to walk more than ten additional kilometers until I reached my Brettljause destination. By the time I arrived, it was completely dark, and the Heuriger had only one other table occupied. I could not help having a strange feeling that I had invaded someone’s private property rather than came to eat and spend my hard-earned cash.

Luckily, once the Brettljause was delivered, that discomfort quickly evaporated, giving way to old instincts. After appreciating the nicely arranged wooden platter for a few seconds (and it truly looked impressive), I commenced the fight, starting, as usual, with the least welcome ingredients: the black pudding and the headcheese. Surprisingly, they turned out quite enjoyable after all, although not as tasty as the Verhackertes, the Geselchtes and the “Osso Collo” (a kind of smoked pork, whose name I first learned from Groiss’s menu). The only disappointment was, unexpectedly, the Speck, which was very fat but insufficiently salty.

The ingredients might not have been especially remarkable, but one must commend Groiss on the level of detail paid to decorating the dish with different vegetables and pickles. All the capers, onions, peppers, cucumbers and whatnots made eating the Brettljause interesting, and the choice of four types of different fresh breads was also a great touch (though coming at an extra cost). I only wish some mustard or even plain old butter was provided, too.

I am sure that had I visited Heuriger Groiss on a sunny summer day and eaten a Brettljause in its garden, my impressions of it would have been totally different. Today it felt like a dark, lonely and slightly scary place in the middle of nowhere. But its wine was top, and its Brettljause was just what I needed.