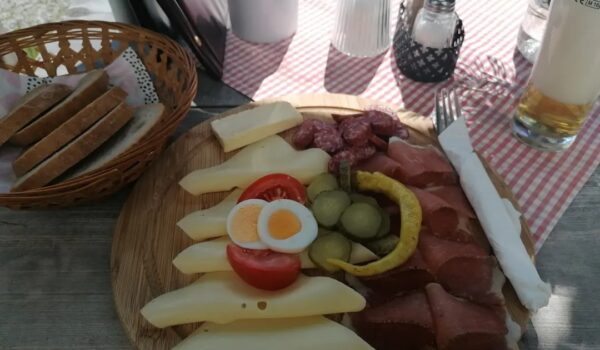 The Jausen menu of the Issenangeralm is more than basic: you can have a Speckbrot, a Käsebrot or a “Räucherwurst,” a smoked sausage with horseradish and bread. Or, if you are indecisive, you can go for the Brettljause, which will combine the above three ingredients on a single, well, Brettl. If you think it’s too simplistic, you are right.

Strangely enough, it works very well. The Issenangeralm is a very simple place, after all, the more famous Pinnisalm (no Brettljause there) and Karalm (no free table) located higher up the valley. The beer and the other drinks come from a spring water-cooled containers, and one sees quite a lot of cows and mountains around.

If you are looking for a sophisticated Jause, look elsewhere. For me, this Brettljause today hit just the right spot. It was not too heavy, the Räucherwurst was quite interesting (the cheese was deadly boring though), the service was friendly and non-obtrusive, and the fact that my hotel was just some two hours away created a sort of a total relaxation.

There was an Italian family at a table nearby, whose father (well, I don’t want to sound gender-biased, but he had a wife and a daughter, so let’s call him “father”) was very interested in what “Pommes” were (“patatas fritas,” the waitress replied, mixing up languages) and called the Zipfer beer “beautiful.” As much as I disagree with him regarding the beer, I found it extremely nice that he might bring his small family to the Issenangeralm again. This is one of the places to be cherished.