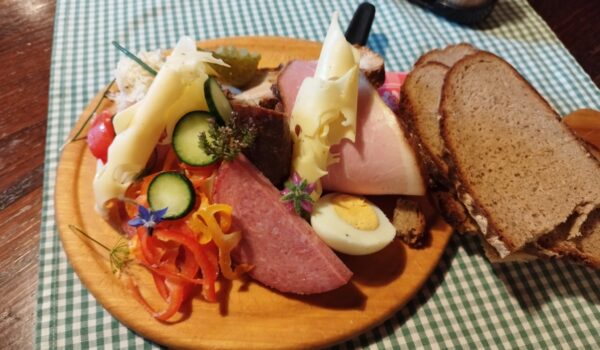 South Tyrol has Seiser Alm. Styria has the Almenland, consisting of Teichalm and Sommeralm. It is a place full of cows, horses and other animals that nature-loving tourists travel long miles to meet and occasionally get attacked by. If you live in Vienna, visiting the Almenland is possible thanks to a well-working (but only in summer) bus network, but is not convenient, unless waking up at 4:30am is a norm for you.

This was exactly the reason why that area has avoided my attention up till now, and frankly speaking, today was not a great day to start, for one hour after my arrival the sky got covered with dark clouds, and an annoying rain started dripping from time to time. The hiking distances turned out much longer than I had expected, so by the time I reached Weizerhütte, I had just over three quarters of an hour left before a bus would take me back home. It should have been enough, because Brettljausen never take long to prepare, and as for eating it – it cannot be too big for less than eight Euros, can it?

I forgot I was in Styria, the land of huge Brettljausen. Even by Styrian standards, however, the Jause of Weizerhütte was big. So big, that the thick slice of ham had to be folded in half because otherwise it could not fit on the plank. Within minutes it became clear that catching the bus was totally unrealistic, so I decided to wait for the next one in two hours and savor my Brettljause slowly and in a focused manner.

I am glad I did, because there was a lot to like about Weizerhütte’s Brettljause. The already mentioned ham was seasoned with alpine herbs, giving it a very delicate taste. The thick slice of cold Schweinsbraten was nearly perfect; had its crust been crunchy instead of rubbery, I would have probably crowned it the king of Schweinsbraten. The hard Hauswurst was locally produced, though I am less sure about the Wiener sausage. Cheese and Speck were served thinly-cut, and while Speck was great, the cheese appeared more a decoration than a proper ingredient.

The Almenland is full of huts and restaurants, most of them serving Brettljausen. If they are anything like the one of Weizerhütte, every Brettljause lover must visit that area at least once or twice. Providing the weather is nice, the hikes and the subsequent meal will well be worth an early awakening.