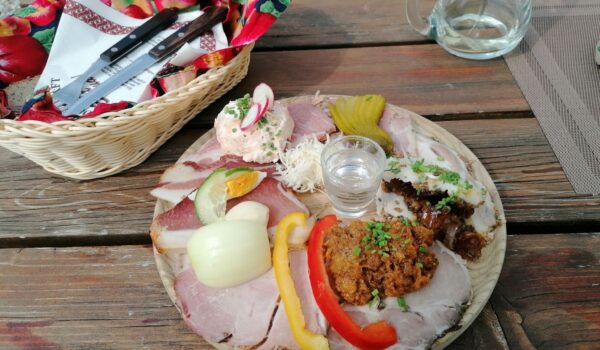 It has been a while since I visited Mostbaron Heurige and that time was enough to forget how good they can be. For those who are not aware, the Mostbarone is a union of several enterprises, including seven Heurige, which decided to serve the best Most (apple or pear cider) across the entire Mostviertel district of the Lower Austria, which means it is the best in Austria as a whole. The Heurige, in addition, offer an extensive menu of local produce, and their Brettljausen, frankly, beat any other you can get in the 150 km radius around Vienna.

The only problem is, some of these Jausen are a bit too fancy, particularly those with “M3” or “Baron” in their names. I fell on one such Jause the last time I went to Hansbauer, which was almost exactly ten years ago. Today I studied the menu more thoroughly and after a lot of deliberation (the list of choices was staggering) went for the thickly-cut urig variety, called – rather unimaginatively – “Hansbauerjause.”

It was huge. Thankfully, the slices were not that thick, but they covered the Brettl nearly completely, and there were spreads over the slices, too. Apart from one Liptauer-like spread (which had a much weaker flavor than a typical Liptauer), all the ingredients were from pork. I would not try naming them all; I did not even know so many different things could be done from a poor pig. The most unusual ones were probably a strong brown Grammelschmalz and a white Schmalz with brownish jelly topping. A whole clove of garlic was present, too, which is very untypical. The garlic was so strong I could not finish it, and its taste stayed with me for a long time, while my colleagues could sense the smell even the following morning.

Of other things, I very much enjoyed a kind of a dry Schweinsbraten with bread filling – a specialty of Mostviertel – and a dry Geselchtes, but frankly, absolutely everything was top quality. Even the free shot of Schnapps was much better than the stuff restaurants in Vienna serve for five euros and more. I am glad that places like Hansbauer exist to remind us how real village food is positively different from the surrogates we get at supermarkets.

Village life is not without its drawbacks, of course, and imperfect sewage systems can be an annoying problem. Unluckily for me, that problem surfaced exactly at the time that I was having my lunch in the Heuriger’s garden. I tried to tell myself that the smell the wind brought to my table far too often came from some cow barn, but clearly that was not the case. If you do not appreciate the smell of toilet while eating (and who does), you may consider sitting indoors. In everything else, Hansbauer is completely worthy of its aristocratic title.