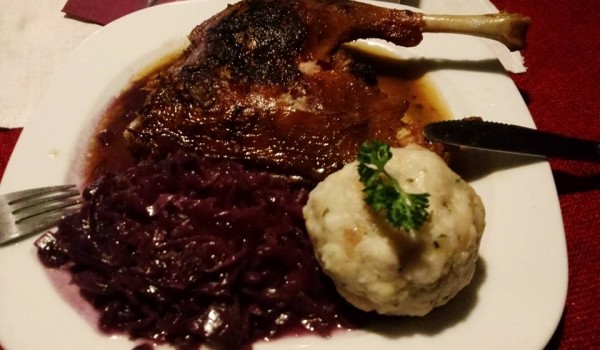 It is always a bit spooky to be alone in a restaurant, but the waiter (who is possibly also the cook) looked very much used to that and quite happy to have at least some company. I think he himself was quite surprised that his restaurant was somehow managing to be open at all.

The goose… could have been worse, really. It could have tasted like the strange pieces of some animal (the grandfather of the goose?) swimming in the fat soup, surrounded by something that could had once been vegetables but forgot about it. It could have tasted like nothing at all, like the salad from the buffet. It could have been undercooked, cold or even plain poisonous. Instead, it was only deflated to the point that its skin glued to the bones with hardly any meat in between. The bits of meat that could be found, mostly around the leg, were OK in a dry chewy way and tended to get between the teeth immediately, probably hoping to leave lasting memories. The red cabbage and the bread dumpling competed with the salad in tastelessness. Occasionally burned skin was definitely the highlight.

Were this restaurant to close tomorrow, the old culture of Viennese Beisls would not suffer much.