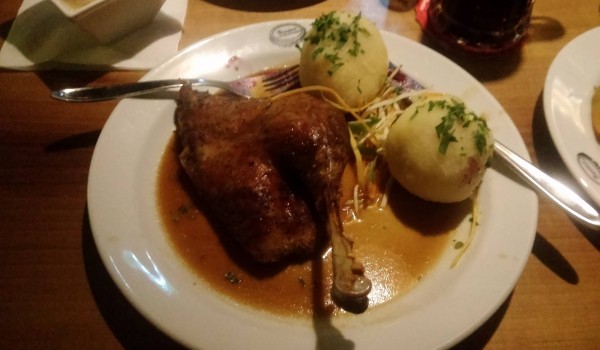 This restaurant of the Brandauer chain is located in a shopping mall, and honestly, I did not expect much of their goose. Unfortunately, it met my low expectations very well.

It did not look too bad, when the waiter brought it: the skin appeared crispy, and it was swimming in its own sauce rather than in something stolen from other dishes. However, an attempt to cut a piece of meat off it was met with such resistance that I started wondering whether there was any meat on the bird at all. It was as if the meat was attached to the bones with some superglue, and the same glue was used to attach the skin to the meat. Incredibly, there was not a piece of goose that came out without a fight. Brandauer should consider serving these birds with a scalpel instead of a knife.

From the taste, it was tough and bland, not helped by a completely boring bread dumpling. The red cabbage, on the other hand, was the highlight of the show, being slightly crunchy and sweeter than normal. It is a pity that it was served with such a boring animal. A word of warning: Brandauer can serve either red cabbage or sour cabbage with Speck with their geese. The sour cabbage is to be avoided at all costs: it is watery, and the Speck inside is mostly fat. However, to tell the truth, the goose itself is best avoided, too.