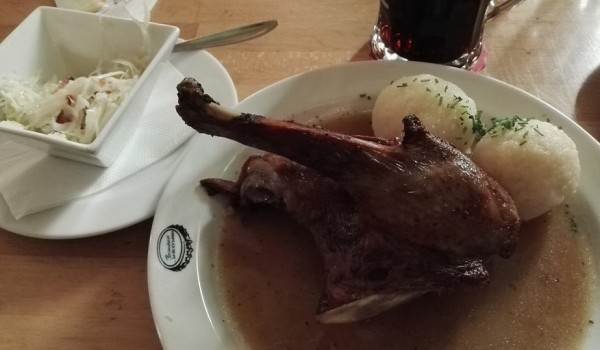 This goose was born a fighter, died a fighter, and managed to remain a fighter long after its death, making sure that whoever tried to eat it would have as strenuous an experience as possible. It made certain that the knife would not cut through its totally uncrispy skin and plenty of meat would remain attached to its bones, so that it could take it with it into its garbage bin of a grave.

Of course, it’s more likely that the goose was a simple sad bird, born with no other future than to be cooked the coming November and almost looking forward to that end. Despite everything, it managed to grow quite big and meaty, and could not imagine that Schlossbräu would wait too long between cooking it and serving it on my table. Which is what they ultimately did.

This was a definitely pre-cooked and warmed up goose, with the actual cooking taking place not even yesterday but several days ago. The large amount of sauce it was served in did little to make the meat tenderer, and the potato dumpling was almost inedible, being of a tasteless sticky sort. Only the warm white cabbage with slices of Speck was somewhat enjoyable.

Brandauer‘s restaurants have been known for large quantities of food but not for fresh food, and today’s goose is another proof of that.