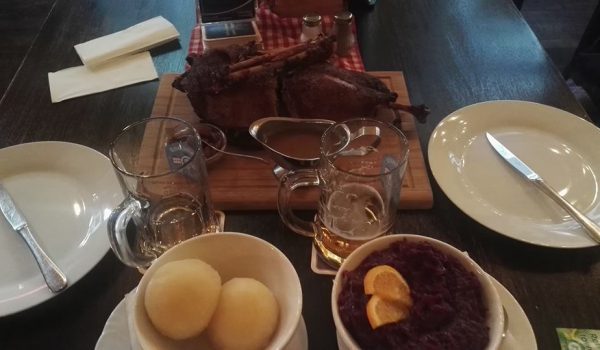 You can hardly see through the glass door of Mariahilferbräu because it is almost completely covered with TripAdvisor’s recommendation stickers. The restaurant’s location near Vienna’s west railway station, from which Westbahn’s trains to Salzburg depart, ensures that there are always plenty of tourists around. On the other hand, according to a reliable source, Mariahilferbräu is actually a good traditional Viennese institution, with its rooms having housed different kinds of restaurants for more than a century. But then, the Mariahilferbräu itself is just over 15 years old.

Still, whenever I ate at the Mariahilferbräu, it always created an impression of being something better than a pure tourist eatery, and for a long time I had in mind to test their cook’s goose roasting skills.

I was positively surprised. In an unusual move, the restaurant only serves the goose as a dish for two persons. Obviously, you get half a goose, which transfers the eternal question “leg or breast” from the cook to whomever you are eating with. Smart. The presentation was impressive: after half an hour of preparation (which I consider a good thing), the half-goose arrived on its own wooden board looking fresh and hot. The red cabbage and the potato dumplings came in their own bowls, and there was also a separate small plate with sweet chestnuts. The sauce was delivered in a jug of its own, which, as I keep on mentioning, is usually a very good sign.

In retrospective, this was the most filling goose I had this year so far. For one thing, it was quite big; even the leg that I’ve got had enough hidden meat to keep discovering it for quite a while. Besides, the goose was really fat. Under the brownish skin there was a 2-3 millimeter layer of pure goose fat, which could have been off-putting, had the skin been less cooked and salted or had the meat been tougher. Yet the cook did a truly good job: the meat was just tender enough not to turn the goose into a chicken, and thoroughly cooked: there were no “medium raw goose” surprises deep inside the bird.

I can also totally praise the cabbage. It had just the right level of sweetness and crispiness with a slight taste of cinnamon and orange. The dumplings had nothing to praise them for, however.

The single most annoying thing about this otherwise fine goose-eating experience was the constant noise coming out of the kitchen, as the cook was angrily beating the schnitzels into a flat shape. This certainly did not add anything to the restaurant’s authenticity, and, I would not be surprised, may have already caused it a few lost TripAdvisor’s points.