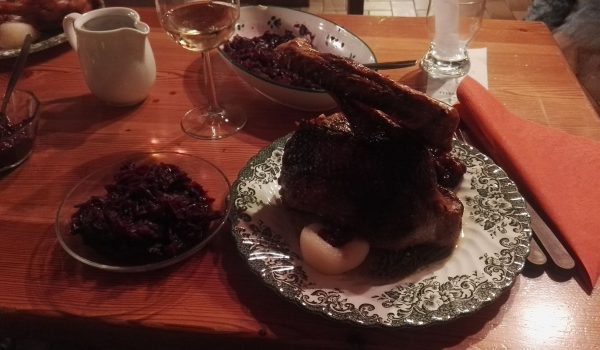 If geese had a religion, they would not honor St. Martin much.

As the legend goes, when St. Martin, the humble man that he was, tried to escape from a jolly crowd of fans intending to ordain him as bishop, he hid himself in a goose pen. The geese, following a rather natural goose behavior, did not appreciate the intruder, and their cackling eventually gave him away. Had the geese known the consequences of that seemingly innocent event, they would have certainly kept their beaks shut. The annual massacre of geese common in Austria and many other European countries around St. Martin’s Day on the 11th of November is one of the most blatant examples of collective punishment in history.

Don’t get me wrong, I am not trying to argue that eating geese is incorrect; all I want to say is that there is no particular reason to eat them in November. Having a lifespan of 20 years or even more, a goose can be eaten at any time of the year, and all that “seasonal dish” nonsense is just a trick to bring more people to the restaurants. At the end of the day, a goose is not an asparagus, which indeed tastes better when freshly harvested.

Buschenschank Schiefer Giebel, my old favorite in Neustift am Walde, Vienna’s second most known wine district after Grinzing, takes the word “seasonal” to the next level by being open for only eleven days a year: four days in August for the annual street festival and seven days in November for the goose. Year after year, the old lady – who is probably the current owner’s mother, but don’t quote me on that – warms up her huge oven and cooks some of the best geese in town, only upon a prior reservation and delivered at exactly the agreed time. Every year I try to visit this Heuriger at least once, and each time I leave very satisfied but somewhat disappointed simultaneously.

Satisfied, because the goose tastes unique. Cooked just for you, it is noticeably fresher than what any other restaurant I know can offer. Schiefer Giebel also possesses some ancient secret of making the goose’s skin crunchy while burning the fat underneath and ensuring that the meat does not get dry. In case you still need some extra juice, the goose comes with a jug of fat to pour over the bird, and the Heuriger is never stingy when it comes to cranberries.

Yet I don’t remember a visit to Schiefer Giebel that was not linked to a slight “why did they mess this up?” feeling. Usually, it’s the matter of size; Schiefer Giebel’s portions are notoriously small. What would have been acceptable had the taste been average or worse, is totally insufficient when the goose is so great. One just starts to enjoy the perfection of the dish and then suddenly it’s over. This year was no exception, but in addition, something went horribly wrong with the red cabbage, too. It was full of vinegar and as a result tasted too sour.

However, these deficiencies do not change the fact that this season Schiefer Giebel has managed to serve a nearly flawless goose. I believe that like with all hand-made things, the quality of this Heuriger’s goose can fluctuate. It’s actually a good sign; if a dish has the same taste year after year, it can only be because it was industrially made, pre-cooked and microwaved.

What this “natural fluctuation” also means is that to fully appreciate the excellence of Schiefer Giebel’s Martinigansl, one has to visit it often, which is extremely difficult considering its opening times. Can anyone convince them that having another goose week some time in spring would be a good business decision? And possibly one more in summer?