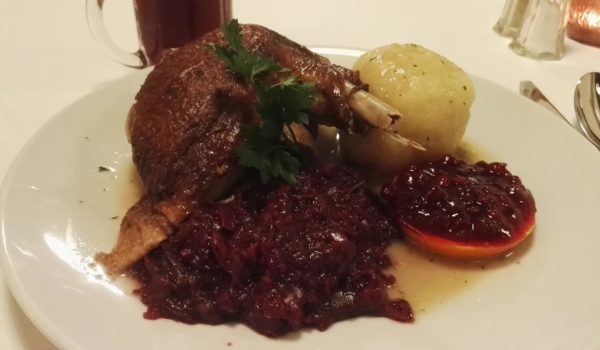 Being quite nasty (occasionally), I was actually looking forward to having a bad goose at Gustl Bauer. After three goose successes this year, it almost seemed appropriate to eat a poorly cooked bird at Halloween and then complain what a culinary horror the evil spirits have sent me. Instead, the fate sent me such an average goose that I am now unable to write anything even remotely original. Evil spirits have a wicked sense of humor.

The goose tasted quite OK at first, disregarding the totally non-crispy skin. The closer I got to the bones, however, the more difficult it became to cut the meat or even to separate the meat from the stuff that was, well, not meat. I am sure the cook could give a very good explanation for that phenomenon, but to me, under-cooking appears to be the most likely reason. It did not help that sauce was almost non-existent (the meat was not too dry to really require one, though), the cabbage was industrial and a bit too sour for my liking, and the potato dumpling was tasteless and “spongy.”

Gustl Bauer is a typical “traditional” first-district restaurant that survives thanks to tourists. It is certainly not a location for Halloween parties, however, and today it was almost empty, with the few visitors speaking German. The ambiance was pleasant enough, but going to Gustl Bauer with the aim of eating a goose would be a mistake. Unless, of course, you are so sick that walking more than 50 steps is a problem, and you just happen to live 50 steps away from the restaurant.