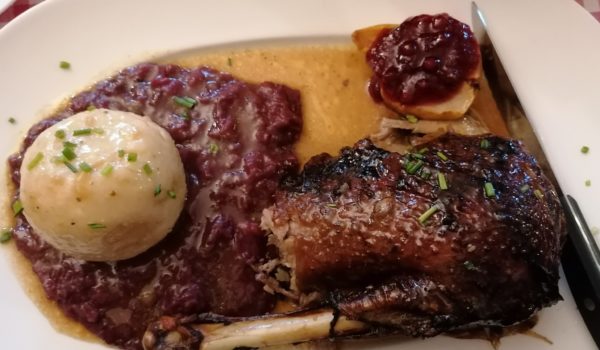 I have realized I am pretty good at falling into the same trap. Just a week ago I had a bit of a goose fiasco having accepted a “leftover” goose when visiting a restaurant without a prior reservation. Today I did reserve, but was one day too late – the goose season at the Brandstetter closed yesterday. When I said, “You don’t have a goose, do you?” to the waiter, I did not as much expect an answer as was trying to come to terms with the fact that the jolly days of Martinigansl were over. “No, sorry,” the waiter replied, but quickly added, “Wait a second, let me check with the cook.” A minute later, he came out of the kitchen smiling and telling an amazing story of someone’s reserving a goose but not turning up. Or turning up but deciding to order a different dish. It was a good story, but after my recent experience, the only reasonable reply should have been “thanks, see you next year.”

Instead, I said, “Great, thanks,” and prepared myself for the worst.

The worst did not come. What came was something past its prime but still very edible. While the skin looked like an old wet cloth, the meat remained very tender and was even easier to chew than that of some much fresher geese. The only problem was that a part of the meat refused to detach itself from the bones, sticking to them like long white threads.

The cabbage did not fare so well, unfortunately. I do not know how it was supposed to look originally, but on my plate, it appeared so liquid that it could have been mistaken for a thick soup. While OK taste-wise, it was slightly sticky and all in all, did very little to enhance the dish.

Nevertheless, I left with the impression that the Brandstetter knows how to cook geese, and when choosing between 6 and 7 for my rating, I did something that I normally do not do, that is tried to imagine how the goose would have tasted had I ordered it on time. Now I need to return next year and verify that my suppositions were right.