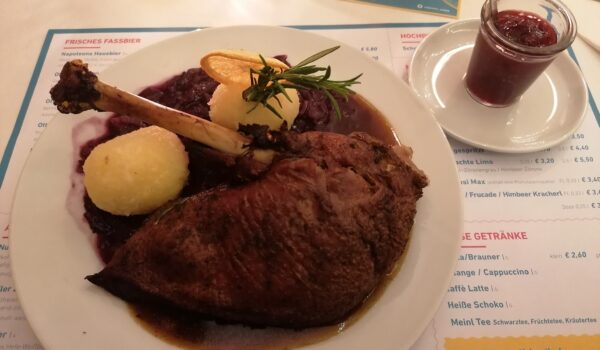 With the imminent second COVID-19 lockdown threatening to shatter this year’s goose season once and forever, we are back in the “this dish could be your last” territory. What is even sadder is that now the traditional St. Martin’s day on November the 11th is almost guaranteed to pass gooseless, the fact that is ought to have a more profound effect on the Austrian society than both World Wars taken together.

The curious thing about the restaurant Napoleon in Vienna’s 22nd district is that a shutdown is nothing new to it. Once one of my favorite lunch places, it had to close its doors in December 2019, having accumulated a debt of biblical proportions. Since then, the building it once occupied has been taken over – even if only temporarily – by the family Querfeld of the Café Landtmann (and more recently the Bootshaus) fame to create a “pop-up” restaurant serving initially beer and snacks, and these days almost exclusively geese.

It was nice to be in the Napoleon again, and even nicer to notice that the takeover had been to its advantage. It looked really polished inside, and the cleverly decorated garden would have been very inviting if not for the nearly winter temperatures. The wait for the goose was tantalizingly long; I was almost two beers drunker by the time it arrived, but the result was worth every minute. It was, put it simply, one of the best geese one could hope for, COVID or not.

Even the smell of it, while I was taking the photo and praying that Facebook did not lag to post it, was highly teasing. The first bite confirmed my great expectations: honestly, I don’t remember such a combination of a paper-thin crispy skin and mega-tender meat. It was like biting through a Pringles chip into a soft pillow. (A very bad comparison, but you get the point.) The pleasure continued throughout the meal, until I reached the very deepest depths of the bird, where the meat became slightly more ordinary.

The cabbage was weird. It was half-crunchy and had a rather strong flavor of vinegar, yet did not exhibit the vinegar’s sourness. It was not particularly sweet, neither did it taste of cabbage. I made sure I ate a few forkfuls of it trying to determine what it tasted of and failed. Anyway, it was not bad, just weird.

The potato dumpling did not taste of anything much, which is fine with me as long as it can absorb the sauce and mix well with the cabbage. The sauce had probably nothing to do with the goose – it was much darker and thicker than the goose fat some restaurants serve – but expertly manufactured to match the dish. There was, however, another way to make use of the dumplings, and that was to dip pieces of them into the berry jam, which positively differentiated itself from all the berry jams I ate with geese previously. While the other jams were 99% sugar, this one was refreshingly sour. It has really restored my faith in berries as a Martinigansl’s side dish.

At another time, my recommendation to you would have been to find a day and go to Napoleon. In the current special circumstances, I can only urge you to run there. Life is too short for bad geese, and we must not let the pandemic decide what we eat.