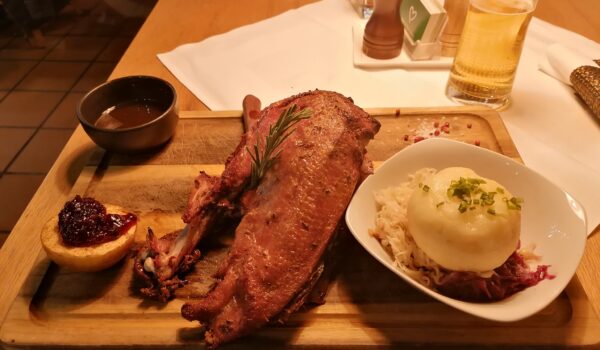 I am well aware of the dangers of trusting restaurants on the basis of the pictures they post online. My recent disastrous experience at Stuwer is a case in point. However, when it came to Klein Steiermark, a grill restaurant in Schweizer Garten near the central railway station, I could believe that the goose they served would look quite similar to the beautiful dish pictured on its website. A few months ago, I visited Klein Steiermark to try its spare ribs, and the presentation was impeccable (the ribs were very good, too). Actually, I could recognize the wooden board from the goose picture as the same that spare ribs were served on.

I wasn’t wrong with my high expectations. The dish, when it arrived at my table, didn’t only look beautiful, it also smelled fantastic, as if just taken off a very hot grill. Which, I am quite sure, it was. According to the menu, the restaurant cooks geese for six hours under a low temperature before putting them on its 400°C grill for the final step.

Now, six hours is a very long time and ought to have a profound effect on the meat. If you value toughness in goose meat, this dish is not for you. This is the tenderest, easiest to chew Gansl I have ever eaten. The meat literally melts in one’s mouth, to the extent that it’s probably suitable for toothless people. The only problem is that they will have to forgo the wonderfully crunchy and perfectly salted skin. The long cooking has also a peculiar effect on the bones: the smaller and thinner ones break and become extremely easy to remove, which I personally consider a good thing.

If I had to compare, the closest thing in terms of texture of Klein Steiermark’s goose is pulled pork. Actually, the slightly smoky flavor that the goose had is another similarity. But don’t get me wrong, it is still a goose, cooked with much love and expertise. It is served with a fantastic honey-spiced sauce, a functional Knödel (its only function being to absorb the sauce) and two types of cabbage: the traditional red one and a white one with bits of Speck in it. The amount of cabbage is smaller than in other places, which is completely fine with me, as I am often struggling to finish it. An apple with lingonberries is provided too, as well as a sprig of rosemary, probably as a tribute to the restaurant’s grilling origins.

If you are into steaks, burgers and spare ribs, I’m sure you will appreciate the goose of Klein Steiermark. If you aren’t, I dare you try it anyway. It might be unlike any other Martinigansl you have eaten before and can become a highlight of the goose season, like it became for me.