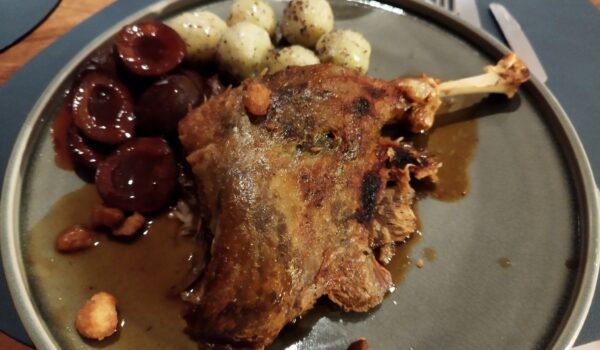 If you are a regular reader of my posts, then first and foremost, you are a liar, for I know very well that this site has no regular visitors whatsoever you must have noticed that last year I did not write anything about my favorite place to eat goose, the Buschenschank Schiefer Giebel. I am not going to write anything about it this year either, because I have run out of words of praise for that place and do not want to repeat myself. The reason I am mentioning it here is that there are some similarities between the geese of Schiefer Giebel and Handwerk, an Arcotel hotel’s restaurant that promises “possibly the crispiest goose in Vienna.” Both are indeed very crispy, though Handwerk would hate to hear that the Schiefer Giebel’s one is crispier. Both are appropriately salted (something many people do not consider important for geese, but it is) and have the “right” goose taste and texture. The portion at Handwerk was quite small, making me wonder how long the goose stayed out of the egg before landing in the oven, but Schiefer Giebel had also been guilty of serving tiny portions in the past (not anymore).

The main contrast is that if when visiting Schiefer Giebel you must order in advance and make sure you arrive punctually, in the case of Handwerk you may simply walk in and have your portion of goose within 20 minutes. If you think I am mentioning this as Handwerk’s advantage, you are wrong. There is a huge difference between a goose that was cooked and served fresh just for you and the goose that had been pre-cooked and then warmed up – no matter how much skill and technology went into the preparation of the latter. Even the color of the meat is different: light brown vs gray.

Having said that, Hardwerk did an impressive job of making its Martinigansl stand out. Offering a slightly more expensive “exclusive” version of the dish with gray poppy dumplings and plums instead of common apple with chestnuts was more than a marketing trick; the non-standard side dishes actually went very well with the goose, making it more interesting. Giving a choice of two flavors of red cabbage – one with plums and laurel and the other with apples and marjoram did not make a strong impression on me, for the taste was almost identical. What annoyed me slightly was that the restaurant charged extra for the cabbage, bringing the otherwise fair price of the goose to hardly justifiable heights. At least potato dumplings were included in the price, and though neither original nor particularly tasty, they provided something to chew in addition to the rather smallish goose. The addition that was truly original, however, was Grammel, or baked pork fat. Normally the stuff that Austrians mix in the Schmalz (lard), Grammel proved to complement goose fantastically – unless, unlike me, you have something against pork, of course.

It was clearly an above-average goose, but having to give the final rating now, I am undecided between a six and a seven. Taste-wise, Hardwerk’s cooks have pulled out quite an achievement. On the other hand, the size of the portion was pitiful, and I did not particularly like the restaurant’s cold and soulless hotel-like atmosphere and artificially attentive service. OK, let it be seven this time – just as a token of respect to the once happy goose and the skillful cook who prepared it.