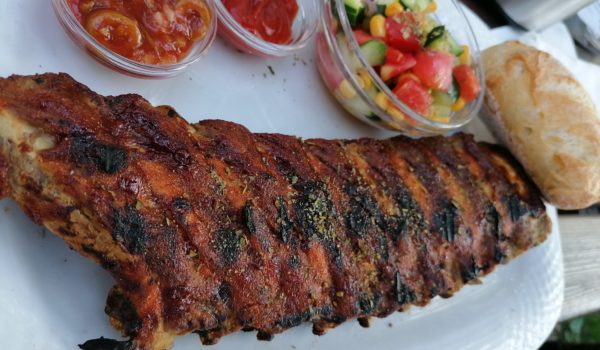 And then there are people who live in Grinzing (and often pay a lot of money for the pleasure), and when they want to go to a Heuriger, they have a couple of hidden places. Weingut Zawodsky is one of them. Located some 20 minutes away from the center of Grinzing, at the edge of vineyards and close to the local cemetery, Zawodsky looks like somebody’s private house whose owner has decided to use the huge garden as a refuge from the tourist hordes. The garden is absolutely lovely, the choice of wines is limited, the buffet is passable but not exceptional, but the special thing about this Heuriger is that one can order grilled dishes from a short menu, and they will be prepared fresh at the edge of the garden. Spare ribs are one of the dishes available (in addition to a grilled sausage, a pork chop and a turkey skewer), and they are indeed cooked in front of your eyes, requiring at least half an hour to be ready.

Now, I am not a big fan of pre-cooked spare ribs, but one thing is true: when the ribs are boiled before grilling, their meat gets tender and juicy and separate from the bones easily. This is absolutely not the case with the spare ribs at Zawodsky. They taste freshly grilled but are very dry. Although the ribs of the experts like Strandcafe and Ribs of Vienna had occasionally suffered from dryness, too, they could often win on the quality of the marinade. The marinade of Zawodsky’s ribs, while present, is nowhere that intricate, so the dryness is quite an issue.

Five types of sauces are on offer (the first one is free, the others come at extra cost), but only two of them show any originality: a curry sauce that I did not try and an olive sauce that I did and found quite pleasant. The salad that also comes with the ribs is simple but welcome, and the complimentary bread roll is fresh and tasty and, frankly, unnecessary.

For anyone fed up with the “tourist-ness” of Grinzing, Weingut Zawodsky is a blessing. It is a quiet, relaxing place with a great view. The location is so good, that the food is almost secondary. The ribs are OK – totally OK – but they should not be the primary reason for going there.