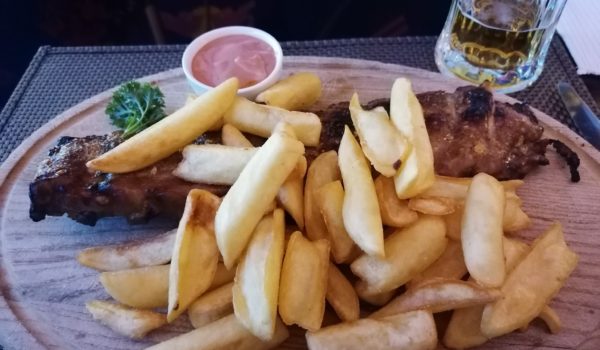 For a place that is supposed to be a famous ski resort, St. Johann im Pongau creates a very underwhelming first impression. With its impressive church almost invisible behind a shopping mall, an unattractive center with an unpleasant combination of fake-traditional and cheap-modern building styles, and uninviting restaurants, it looks like a large village to which the residents of the smaller villages nearby go on Friday and Saturday evenings in search of entertainment.

It requires more than half an hour of walking uphill to reach the Alpendorf (“Alpine Village”), where most of the visitors stay. Located in the vicinity of a cable car, the “Village” is a concentration of about a dozen seriously huge 4-star hotels and many smaller dwellings. The Oberforsthof Alm, a nice restaurant with a bar, a dance floor and a large terrace overlooking the village, is impossible to miss, especially in the late evening, when it is brightly illuminated from all sides.

The restaurant’s menu has an entire page devoted to rather costly grilled dishes, with the “Spare Rips” (sic) being one of them. Despite the hefty price of 19 euros, the ribs were served as a single rack, with only one sauce but with a pile of French fries, which surprised me by being hollow inside.

The ribs themselves did not taste freshly cooked, but created an impression of having been pre-smoked rather than pre-boiled. The meat was slightly tough and not easily detachable from the bones. It was also quite strongly marinated in something hard to identify but likely involving pepper, lemon and garlic. The marinade was actually better than the totally industrial and boring cocktail sauce.

Generally speaking, the ribs were edible, but at the end I was almost happy that there was no second rack of them to fight against. I quite enjoyed the restaurant – the view from the terrace was great, and the service was friendly and efficient – but while I would happily have a drink there given another chance, I would not recommend anyone order its “Rips.”