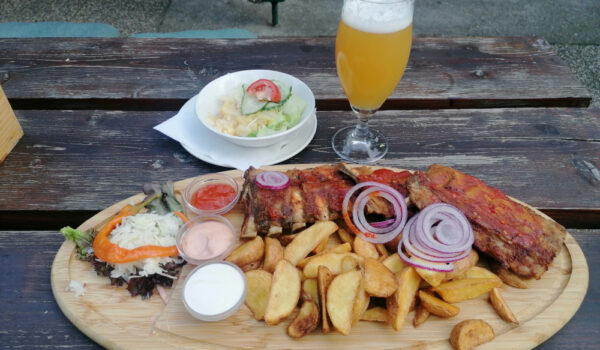 Upon hearing the name “Schwechat,” most people think of Vienna International Airport, which is indeed not far away. Those brave or not-very-busy enough to visit Schwechat in person know that it is a proper small town on its own, featuring an ugly main square, a small and pointless town hall park and even a cellar street, where most cellars are routinely closed. Both times I went there, only one Heuriger was open, and it did not serve a Brettljause, making me immediately lose any interest in it. There is a restaurant with spare ribs on that street though, and it piqued my interest. In the absence of anything more exciting, that is.

Tyroler Stub´n offers four types of spare ribs – classic, garlic, honey-crust and spicy – and from my past experience this is seldom a good sign. Very often, a cook would simply take a rack of pre-cooked spare ribs, spread the “customer’s seasoning of choice” over it and then stuff it into a microwave. Fortunately, Tyroler Stub´n appears to do the job properly: the “spicy” ribs I got were so thoroughly marinated that I could easily believe that the spices had been added early on. I would not call the result spicy, but some chili was involved, and at least the meat did not taste of pig.

Two racks were served, and the first one I tried was quite dry. The second one was much better, however, but that was an indication that the restaurant had kept its ribs half-cooked. Almost every restaurant does that, however, so by itself it is not a reason to complain. The dryness aside, the meat was fine, suffering neither from little bones nor from annoying transparent “skin.” Out of three sauces, only one, the red spicy one, presented any interest, but it was still nice to have a choice.

Tyroler Stub´n’s spare ribs may be average, but they are average in a good way. Don’t expect a lot, and you will enjoy them. Why you would go to Schwechat for dinner is a different question, of course. The only reason I can think of is if you take pleasure in watching departing planes’ flying over your hear from time to time.