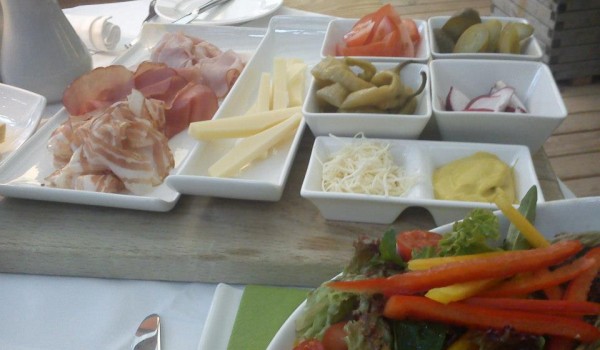 Here is a strange one. What I got was a huge piece of wood (the Brettl), holding eight plates. The two larger plates contained three pieces of meat (Speck, ham and some salty ham of reddish color, which could be Volkanoschinken, but does not have to) and thickly cut sticks of cheese. The smaller places contained fresh tomatoes, sliced salty cucumbers (comparatively lots of them), fresh radish, overly pickled Pfefferoni (again, in unusually large quantities), horseradish and mustard. The bread came in small slices of dark and white varieties, and was quite possibly freshly cooked.

The Speck and the red ham were quite outstanding; the other ham and the cheese totally acceptable. The distinctly non-industrial mustard was the greatest hit, very easily usable in place of butter, and the horseradish brought tears to my eyes on one occasion, which is a good sign. The quantity was not overwhelming, but the way the ingredients were arranged encouraged slow eating, and the end result was very satisfactory.

Hajszan Neumann is an expensive place, especially when consuming large quantities of wine, so the entire dinner made me more than 50 Euros poorer, but the Brettljause itself is priced reasonably for what it is worth. Being quite different from the rest of the bunch, it’s somewhat hard to rate, but the average score it gets is the sign of goodness rather than mediocrity.