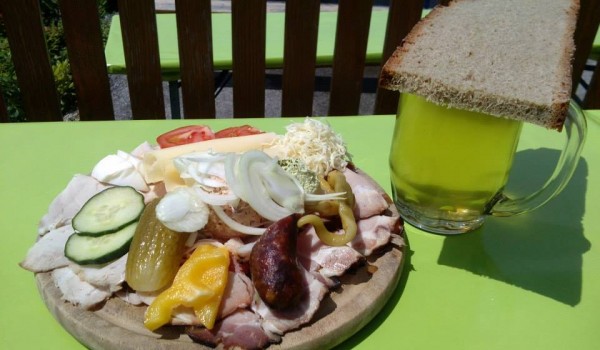 Not that it is bad at any rate. The best parts of it were two spreads – a meaty smoky orange one and a herby white one – and a far too short piece of a smoked sausage. Of the other meats there were three, I think, though they looked quite similar. The Geselchtes (if it was a Geselchtes) had a strong salty taste and was the best of them, while the cold Schweinsbraten disappointed somewhat by being very fat and containing a bit of cartilage (fortunately eaten by a very small and very fat white dog of the owners).

To accompany all this, there were two slices of forgettable cheese, some onions, cucumbers, tomatoes, eggs and horseradish. All of them were very welcome, but hardly sufficient, so the Jause turned out to be slightly unbalanced towards the meat side. Still, at four and a half Euro including bread this was one of the best-value-for-money dishes, and the location, while not extraordinary, is definitely worth a visit once in a while.