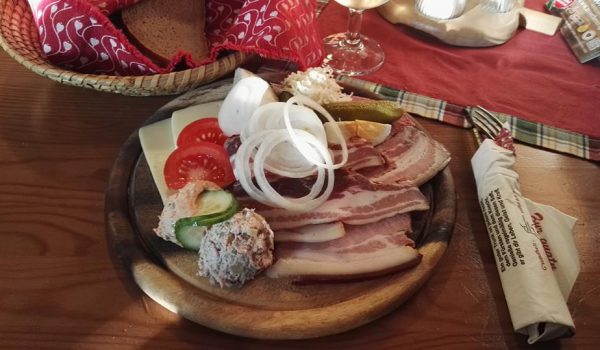 2016 was the year when I finally visited the last of the Mostbaron Heurigers – the elite group of Most producers in the Mostviertel region of Lower Austria, carefully selected for the quality of their Most, food and service. While it is tempting to begin returning to these wonderful places in order to try different entries in their extensive Jausen menus, one should not forget that Mostviertel is also full of other Heurigers that may be just as worth visiting. After all, the currently best Brettljause of Lower Austria was found at Mostheuriger Lettner, which does not bear the Baron’s title.

Also, Mostviertel has always been for me a place to visit in April or in May. In summer, once the pear and apple trees lose their flowers, it becomes just too hot and boring. In autumn, the colors of the hills must look lovely, but honestly, there are plenty of more beautiful landscapes, for example in South Styria. The visit to Z’Gridling was the first time I tried travelling to Mostviertel in winter, which just confirmed the fact that the spring is the only reasonable time to go; the snow on the hills was quite a nice sight, but the wind and the cold were anything but pleasant.

The timing was also wrong because sitting outside would have been much more enjoyable. Inside, Z’Gridling is very small, with just three or four long tables, which got filled rather quickly by the locals. I was lucky to find my own small table, but ended up facing a very simple bar and an open door to the kitchen. It was a very non-Baron setting, but luckily, the Brettljause was everything I hoped for and even more.

It was mostly thickly cut and very varied, with all the ingredients (probably with the exception of the cheese) being locally produced. The only disappointment came from one of the two types of Speck, which tasted as if it stayed in the storage room for many years. Fortunately, the other ingredients more than compensated for that deficiency: the second Speck, the Schweinsbraten, the Bratl, the Geselchtes, the meat spread and the typically Mostviertel’s cold meat dumpling were consistently excellent. Even the Liptauer was quite good.

In the good Mostviertel’s style, the menu offered a few other interesting options, including a thinly cut Brettljause, a 50/50 meat/cheese combination and breads with different stuff, such as the Grammelschmalz. When the weather is nice enough to eat in the garden, Z’Gridling is certainly worth coming back to, especially considering its relative closeness to a railway station.