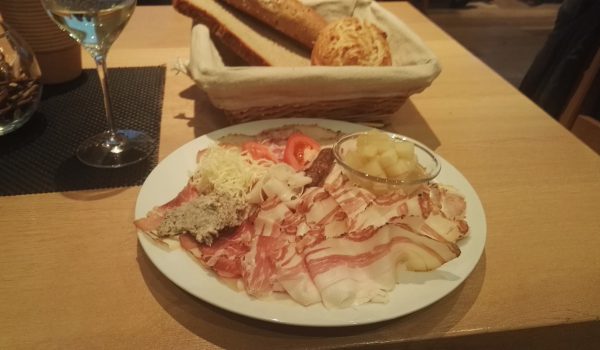 All’s well that ends well, they say. I don’t know how this year is going to end, but it certainly starts well, at least Brettljause-wise. There is never much choice when it comes to open Heurigers on the first weekend of a year, and finding Stober, conveniently located in Krems just one hour away from Vienna, was pure luck.

It looks quite modern and not especially cozy inside, but is very traditional in terms of service and atmosphere. There is a big dog sleeping at the kitchen’s entrance, waking up only to bark (in a not very friendly manner) at all the visitors. Who seem to be mostly elderly locals and returning customers, spending ages chatting with Mr Stoiber.

Untypically, there is no buffet in this Heuriger; all the dishes need to be chosen from a menu. Some of them are quite unusual, like a Geselchtes from a wild boar, smoked salmon with red beets, or tasty cheese from Vorarlberg, which I tried and liked a lot. There are also three types of Brettljause, from which I chose the most expensive one, called “Saugut” (literally, “damn good”).

Damn good it was, too. Although lacking in cheese (which explains my additional order), it contained some of the best pieces of pig that I have ever tried. The only close comparison I can think of is Brolli Arkadenhof in South Styria. There were two types of thinly cut Speck, both of them so tender they were melting in my mouth (not literally, that would have been quite off-putting). The Geselchtes had a grayish color and was slightly dry, but still good when combined with the horseradish, home-pickled cucumbers and surprisingly fresh bread: very warm but not tasting warmed-up. I also found a single slice of Lardo (pure fat Speck) in the middle of the plate. I don’t know if it ended up there intentionally or by an accident, but I would have loved to try more of it, as it was perfectly spiced and tasty. The only real disappointment was the liver spread, whose taste of liver was just over the tolerance level for someone like me, who does not like liver at all.

I always considered Krems a convenient, but a boring place to visit, and despite its touristic character, quite poor in terms of food. Stoiber has managed to change my opinion once and forever.