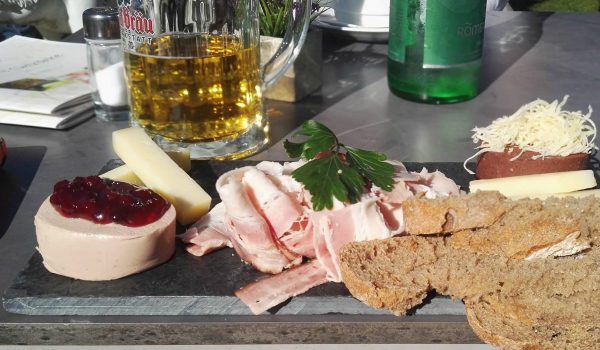 Blame the weather. 25ºC in mid-October really pulls people outside, and this restaurant in Vienna’s popular Lainzer Tiergarten was not ready for the influx. Sweaty waiters were engaged in some sort of a Brownian motion, their taking and delivering orders resembling a tennis match against twenty opponents at once. With twenty balls. I spent ten minutes looking for a table, missing three or four opportunities by mere milliseconds. Then I found, by pure luck, a small one table just to have a couple coming and asking to share it. I was too surprised to say “no.” They would not have heard my “no” anyway, I guess, because of all the screaming kids running around and their parents screaming at them to get quiet. Actually, it was a nice and friendly couple, who managed to catch a waiter within seconds (I had to wait at least a quarter of an hour) but were still waiting for the food after I had finished mine. But then they succeeded in finishing their dishes and leaving while I was still waiting for my final glass of wine and the bill.

Bizarrely, the most annoying element of that situation were the ladybugs, which – probably driven mad by the abnormal weather – were constantly landing on the table and on the page of the book I was reading, and occasionally simply hitting various parts of my body at high speed.

I am not sure if I would have enjoyed the Brettljause had it even been fantastic. It was not. It was as if the cook decided to annoy me even more and made sure that the most prominently featured ingredients were exactly the ones I like least: a blood sausage and a liver pâté. The sausage was conquered by wrapping it in horseradish and trying not to think. As for the pâté, even the thick layer of jam on its top could not kill the strong taste of liver. The strange type of bread that kept on falling apart did not help alleviate my suffering, and was so sparse that it ran out before I could use it on the better ingredients: Geselchtes, Speck and Bergkäse.

The Speck and especially the cheese were quite good, actually, and the Geselchtes would have been fine, too, had the cook noticed and removed a huge piece of skin that tasted like rubber.

It was only later that I spotted the name of the restaurant – Labstelle – which I am quite sure was different the last time I visited it a few years ago. I could not find it by googling if there was any relationship between this Labstelle and the Labstelle in the first district, the home of the worst Brettljause ever. But please rest assured that despite everything I wrote above, this Steinbrettl Jaus’n is a delight in comparison.