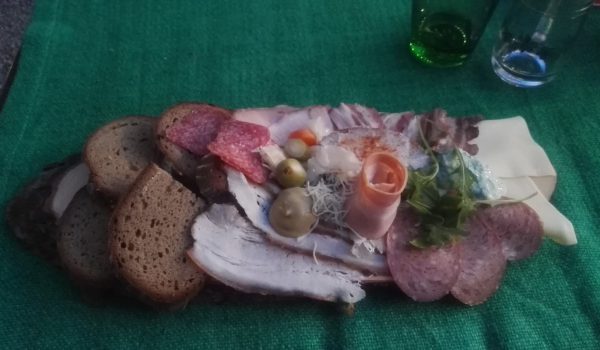 Wilhelm Busch was a German poet and illustrator (and alcoholic) famous for his Max and Moritz children story about two pranksters. It is a very appropriate name for this Heuriger, because for the entire two hours I spent there, I felt like a victim of a particularly cruel and unfunny prank. I was actually expecting a TV crew to suddenly appear and shout, “Smile, you are on Candid Camera!”

Alas, it never happened. Yet, if BBC would one day decide to film a remake of Fawlty Towers, there is no better location than Wilhelm Busch, and they can easily save on John Cleese’s fees, for he would have to work hard to match the staff of this Heuriger, the waitress (and most likely the owner) in particular.

It is hard to believe that a restaurant can be so dysfunctional. While sitting in the garden, slowly sipping my quarter of wine and waiting for the Brettljause, I saw people trying to place an order just to be shouted at by the waitress, who had just so many other things to do and tables to serve. Later, when trying to enquire when the order will actually arrive, they were shouted at again and told to shut up and wait. When almost an hour later wrong dishes were delivered, it was again the customers’ fault, because they did not order clearly enough. At the same time, the waitress constantly disappeared inside the tavern, where a wild party was taking place, coming back increasingly more disoriented and rude.

Glasses fell and shattered, the ashtrays remained unemptied, items of cutlery were dropped and left lying on the ground. New visitors came, looked around, heard the waitress’s moans and immediately turned back. A physically challenged couple struggled to climb up the steps to the garden and twenty minutes later struggled to climb them down, having given up placing an order. A family enquiring about the table they had reserved, was told that no reservation was found. At a table next to mine, an argument started within the group; some of the guests could not stand the lack of service, while the lady who must have organized the visit got increasingly upset, though admitting that “This place has always been chaotic, but not to such an extent.” Finally, she invited the waitress for a glass of Schnapps – an invitation the waitress readily accepted but that did not make her any friendlier.

More than forty minutes after ordering a Brettljause, I had a Schmalzbrot delivered to my table. When I pointed out the mistake, the waitress took away the Schmalzbrot and told me that the Brettljause would certainly take time. The additional wine and soda water that I ordered from a second waiter (a young guy who was not allowed to handle the money and thus looked completely resigned, referring everyone to the “Chefin”), never arrived. Actually, they did arrive to the table behind me, and I cannot blame the table’s occupants for accepting them, for they must have waited too long for their own order. Sometime later, two Brettljausen were mistakenly brought to the table with the arguing group, so I found the courage to ask whether one of them was in fact mine. Instead of an answer, I had the Brettljause rudely dropped at the other end of my table. No cutlery or napkins included, of course.

I spent the last forty minutes of my stay desperately trying to pay. Twice the waitress told me she would come soon, just to disappear inside to join the party. Finally, noticing that she went out to smoke a cigarette outside, I walked to her, obviously annoying her by interrupting her well-deserved pause. After some grumbling, she told me to follow her inside, where she immediately joined the partygoers in dancing. It was surreal.

Before you call me an idiot (something that I would find hard to dispute in this particular case) and advise me to read customers’ reviews before vising a restaurant (google this Heuriger and you can read about many experiences similar to mine), the only reason I went through this nonsense was to find out whether the Brettljause of Wilhelm Busch was any good. Surprise, surprise – it wasn’t. It looked normal enough, if one ignored the fact that the ingredients were distributed over the board in a rather haphazard manner. The pickles were hard to identify, though; a carrot was included, I believe, but I cannot name the other vegetables with any certainty. One item (seen on the photograph) must have been an underripe olive with a slice cut off its side. Weird and slightly worrying.

Still, everything went almost OK until I put a slice of Schweinsbraten in my mouth and realized that the skin it still had attached to it was impossible to chew. Taking the skin out of the mouth was a less-than-pleasant experience, but it was quickly surpassed when the overly salty Speck that I tried to eat next happened to contain plenty of pieces of cartilage. While spitting them out without spitting the half-chewed Speck was impossible, I had to resort to swallowing – a task made almost impossible by the lack of wine or water.

For the sake of fairness, there are places that serve worse Brettljausen. However, in my experience I have never visited a worse place to eat a Brettljause. At some point, I considered increasing the overall rating from one to two if I did not end up with stomach problems by the next morning. The next morning I felt OK, yet the score remains. The whole purpose of a Heuriger is to provide a place to relax. Wilhelm Busch provides nothing but stress and a test of one’s patience. I hope one day someone will take it over, use its nice garden with old trees for a properly managed restaurant and – most importantly – kick out all the staff. Grounding them and feeding them to ducks, Max and Moritz-style, is optional, but would be well-deserved.