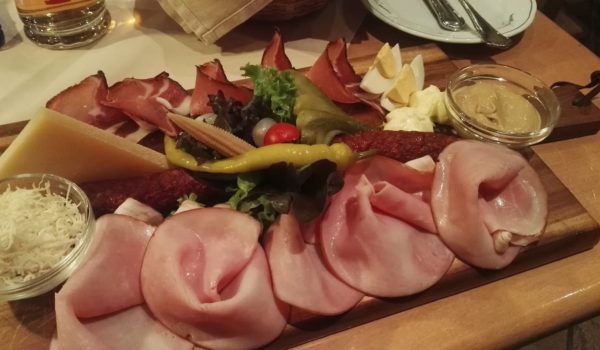 In expensive Austrian restaurants, it is quite common to charge for the “Gedeck.” In theory, it is the cost of the service: the money you have you pay just to occupy the restaurant’s table and use its knife and fork. In practice, however, restaurants often give you a little something in return, like a few slices of bread and a couple of spreads. More often than not, these little appetizers are good enough to justify the extra price.

Bierwirt is neither an expensive restaurant nor did it charge me for the slightly garlicky spread they brought me shortly after I had ordered a Brettljause. They charged me for the bread though, including the two rolls I ate with the spread while waiting for the Jause. Why the spread, which I quite liked, was not made part of the Brettljause is beyond me. Bierwirt has just lost a variety point for nothing.

The Jause itself demonstrated its South Tyrolean “Marende” heritage by including Speck, mountain cheese and what should have been a Kaminwurzn, but tasted like one of the standard Handl’s products. In addition, probably as a nod to Austria, it contained some fairly tasty ham. The end result was a fully functional, but an unexceptional Jause, improved by the presence of strong Styrian horseradish but marred by a very industrial and boring mustard as well as cocktail onions straight out of a can.

As a capital of Tyrol, Innsbruck strangely appears to be quite poor when it comes to Brettljausen. For that reason alone, Bierwirt is worth a visit, even if it is almost an hour walk away for the city center. The other reason is that it allows one to see Innsbruck beyond its center, and I am still of the opinion it is a cool city to explore.