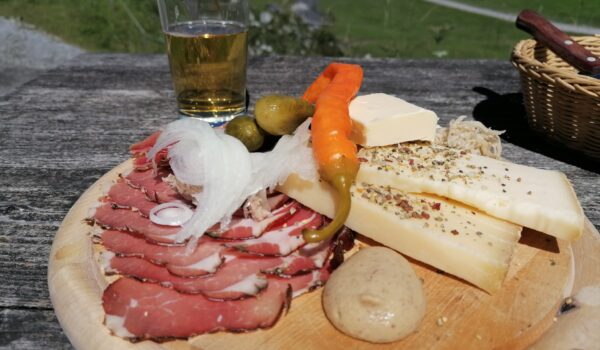 I’ve just spent half an hour searching in German and English dictionaries, and I am still a bit confused. I always thought that the English word “Alps” had something to do with the German “Almen,” that is, pastures. Apparently I was wrong. According to Merriam-Webster, an alp is a “high rugged mountain.” Fair enough, there are quite a few of them here in Vorarlberg, of different levels of ruggedness. On the other hand, a German-language information stand next to the small farm/snack place weirdly called Alpe Dalaaser Staffel talked about the “alpe” exactly in the meaning of pastures – like, there are so many of them in the state, and the number of cows is so-and-so, etc. On the other hand, a more common meaning of an “alp” (or “alb”) in German is a kobold-like evil creature that comes to you at night and destroys your sleep. That’s where the German word for nightmare – Albtraum or Alptraum – originated from.

Think what you want, but the Dalaaser Staffel looks like a simple peaceful place. A few minutes away from the Spullersee, a picturesque lake not far from the village of Lech (but not half as beautiful as the lake Formarin nearby), it is perfectly located to cater for the tourists walking down from the lake back to the civilization and well as for the cyclists riding their e-bikes towards the lake. There is not much to eat apart from the Brettljause, and the beer comes from the bottles only (at 5.6% alcohol content, refreshingly strong for a change), but that is totally fine as far as I am concerned.

Cheese and milk seem to be the farm’s “flagship products,” and truly the two types of thickly-cut cheese were good. Not as strong as I would have liked, perhaps, and with some herbs and pepper scattered over it unnecessary, but good anyway. The other ingredients included two types of Speck – or maybe a Speck and some dried ham that made it look slightly different from the Speck only by the texture of fat in it – and a Verhackertes spread. All three of them had a pleasant “home-made” taste. The bread was surprisingly fresh, as was the butter, which has probably also come from the farm’s own production. The only bit that bothered me a bit was the horseradish, which had a darker color than usual and was for some reason wet. It was as if it has aged, and the cook decided to make it softer by adding some water. Naturally, in that condition it did not have any strong taste at all.

It was a nice and simple type of Jause that was very welcome when I tried it, but which I am not very likely to try again (though hiring and e-bike and cycling up to the lake during my next visit sounds very appealing). However, if you are visiting the Spullersee and especially walking back to Lech (or Zug), give it a try, and you will not be disappointed. Particularly because unlike in the restaurants of the skiing villages, the prices at the Dalaaser Staffel are completely reasonable.

P.S. After a few more days in Vorarlberg I can confirm that an “Alpe” is the western Austrian equivalent of an “Alm.” If you look around, you can still find a few restaurants with “Alm” in their names, but generally speaking, visiting an “Alpe” would give you a chance of drinking some fresh milk, some bottled beer and eating a Jause of some sort. In a way, it’s a pity that no kobolds are involved.