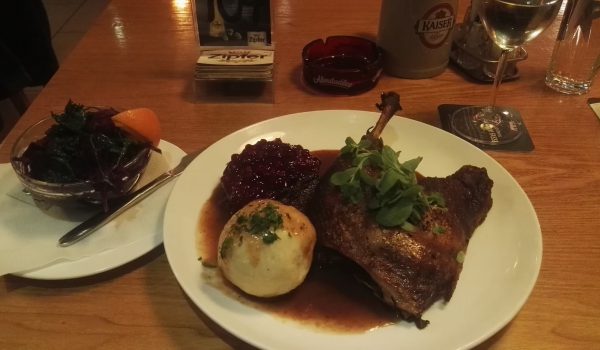 Funny, just a couple of days ago I was complaining of a perfectly good goose marred by the lack of spices. Now I am going to grumble about a goose so spiced that the bird got lost under all the flavors.

It’s not even the end of October, but the red cabbage already tastes like Christmas. While I have nothing against cinnamon (well, not much), having the cabbage tasting like a Christmas punch feels weird unless Jingle Bells are playing outside. And the goose has marjoram leaves all over it, which happens at a totally wrong moment for me, as I spent the morning cleaning the toilets at home, and the flavor of marjoram reminds me of nothing but the cleaning detergent.

There is also half of a baked apple on my plate, covered with a thick layer of cranberry jam. Good as it looks, soon I find the entire goose swimming in some sort of an apple-cranberry sauce, killing whatever taste there remains after the marjoram/cinnamon attack. It’s as if the cook wants to hide something.

There was nothing to hide, in that case. The goose itself was average, marginally enjoyable when the teeth hit the crunchy bits, boring, in a positive way, most of the other times. The portion could have been bigger, of course, considering all the other stuff served with it, but given a chance, I wouldn’t have really asked for more.

Despite all my criticism, if you are looking for a goose early in October, Pan is a totally viable option. The problem is, the chances that you go to Kaiserebersdorf – which is mainly known as a faraway place one passes on the way to the airport – are so slim, that it makes no difference whether I recommend it or not.