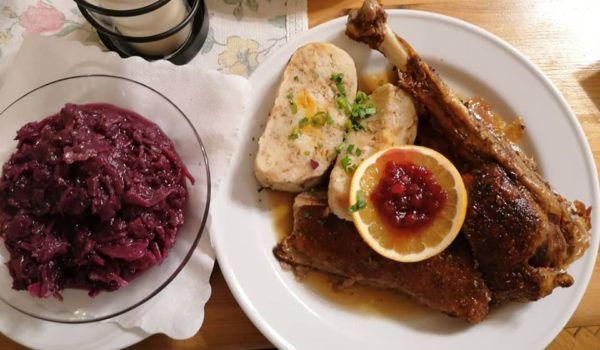 Places like Buschenschank Haslinger are best visited with no expectations whatsoever. Unfortunately for me, I had considered the Haslinger as a potential goose place since quite a while. First, it is located quite close to Neustift am Walde, the home of the exceedingly excellent Schiefer Giebel. Second, like the Schiefer Giebel, it asks for an advance reservation if one wants to eat a goose. Third, I had visited the Haslinger quite a few times in the past, usually as a quiet destination to relax after surviving the noisy and stressful Neustift’s wine festival, which takes places every August. Each time, while enjoying a glass of wine in the Haslinger’s garden – or on its rather nice roof terrace – I was thinking that a goose at this simple tavern could be quite good. In other words, I had had some expectations – which, unfortunately, were destined to remain unfulfilled.

Even before I had a chance to bite into the goose’s leg for the first time, I could not help but notice a few details that felt flawed. To start with, the lights were all wrong. In compliance with the new Austrian law, the tavern was entirely a non-smoking area, and my table was in the former room for smokers. Perhaps with the smoke all around the place, it would have looked better, but without it, the room’s lights were far too bright, reminiscent of a hospital’s operating theater. The cutlery was the cheapest possible, with the knife’s and the fork’s handles made out of plastic and wood-colored in a highly unconvincing fashion. Furthermore, the goose itself arrived on a plate so small that it would have hardly been appropriate for a salad, and totally unsuitable for a goose, a slice of orange with cowberries and two bread dumplings. The dish looked like something they serve at an office canteen for lunch.

The goose was OK, incidentally. Consisting of a leg and a part of the breast, it contained enough meat to stifle the hunger, and was reasonably tender and fat-free. The bird must have been on a diet during the last weeks of its life, but it was by no means anorexic. The dumplings were edible for the simple reason of being made of bread rather than potatoes, but lacked any sort of spices. Similarly, the red cabbage was of the blandest sort, probably coming straight out of a carton.

The main problem was that neither the food or wine quality nor the ambiance encouraged an extended stay. As I result, I finished the goose in less than ten minutes and was out on the street almost immediately afterwards. The Haslinger may be a pleasant place to enjoy a glass or two in summer, but as a Martinigansl location it is hopelessly unremarkable.