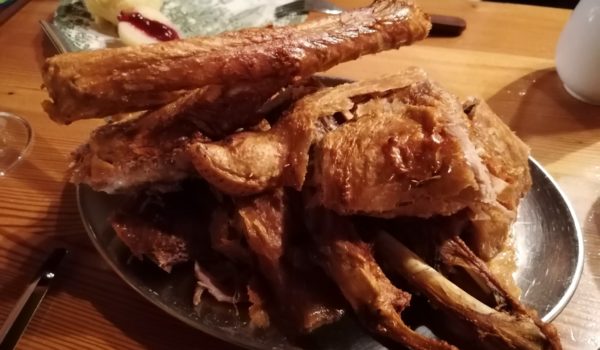 I must admit, I always look forward to the start of the goose season, despite the fact that eating and reviewing 10+ geese in one month is hard work. (If you do not believe me, try it yourself. Forget about the reviewing, simply eat 10 geese within a month and tell me if it was easy.) But there are moments like today’s evening when I ask myself why do I bother at all. The problem is that it is very difficult to continue to write pretending there is some kind of a competition when one of the players is playing in a different league.

The Gansl of the Schiefer Giebel is so much better than any other goose out there – including all the top recommendations in Austrian newspapers and magazines – that one wonders if it is the same animal. Moreover, this year Schiefer Giebel has outdone itself by serving multiple portions of the goose on a single platter and cutting each portion into two or three smaller pieces. This simple trick has effectively solved the size problem that plagued the Heuriger in the past. In the previous years, some portions – legs, mainly – were much smaller than the others, resulting in those visitors who were unlucky to get them to leave hungry. Now, people can easily choose themselves how much they want to eat without ever feeling disadvantaged.

Of course, I may grumble that the red cabbage was still a bit more acidic than I would have preferred. I could also mention that the dumpling was not life-changing (dumplings are naturally dull and nothing can alter that). The goose, however, was perfect. I cannot think of any way it could have been cooked better.

I hope I am wrong. I hope there is another little-known restaurant that serves if not a better Martinigansl, then at least a comparable one, so that there is some sort of competition to write about. Until that happens, however, the geese of Schiefer Giebel will continue to win. And win. And win.