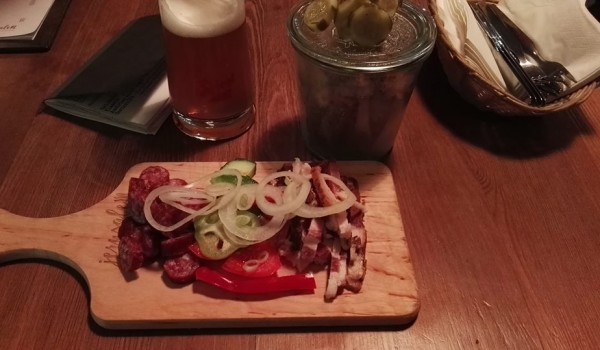 It’s not every day that a new restaurant serving a Brettljause-like dish opens in Vienna (heck, it’s not even every year). It’s understandable therefore that having read about the newly opened Jerusalem and its Speck Jause made out of some particularly happy ex-pig I simply had to visit it. The problem is, whenever I see the word “Jerusalem” (which is accidentally the last name of the restaurant’s owner), I think of Monty Python’s “Jelusarem” song, to the point that I have to try hard to spell the word correctly.

Actually in this case the misspelling would have been quite appropriate because what the restaurant serves under the name “Speckteller” is more of a Blettrjause, so far it is from what a Brettljause is expected to be. Its only two ingredients were the aforementioned Speck cut in a rather silly way (as long thin Speck-sticks) and some long and hard beef/pork sausage cut into tiny round slices. The middle of the Brettl was decorated with slices of fresh cucumber, paprika, onion and tomato. The strangest part of the dish came in the form of a glass jar filled with slices of warm dark bread. In addition, the jar’s lid served as a container for a few slices of a very peculiarly pickled cucumber, whose taste was simply unidentifiable.

If you are thinking that above sounds like a pretentious creation destined to be overpriced, you are absolutely right. Trouble is, it was not even good taste-wise. The hard sausage was too hard to chew to truly appreciate, and the Speck, though of good quality was too stupidly cut and too sparse to properly savor. The whole dish had the appearance of an expensive starter, encouraging me to take a “proper” main dish afterwards (a burger), which also turned out creative but lacking meat and ultimately tasteless.

Based on my first (which, I am afraid, can remain my only) impression, Jerusalem, despite its rather basic “Beisl appearance,” tries to be a concept restaurant serving something different. Their weird-looking menu and their choice of unusual beers is a proof of that. There is nothing wrong about being different, of course. The next logical step would be to try being good.