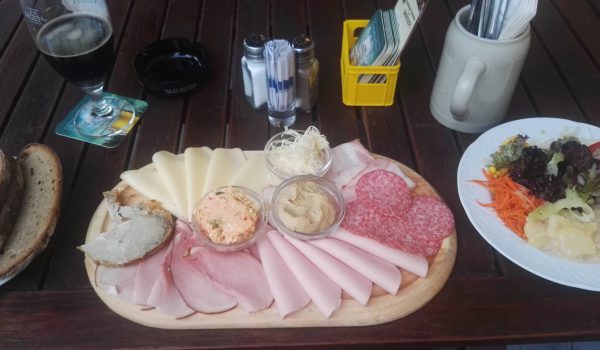 The last time I ate something called “Pongauer Brettljause,” it was in one of Brandauer’s restaurants in Vienna: good for beer, average food-wise. Even then, I wondered what was so “Pongauer” about the pretty generic stuff I ate. The only impression I got was that the region of Pongau must have had the same Billa and Spar supermarkets as the rest of the country.

Now I find a restaurant called “Bieriger” – sounding suspiciously similar to the “Bierbögen” of Brandauer and serving something under the same name. I would bet a small amount of money that there is a connection: a former cook, perhaps, because the ingredients of Bieriger’s Jause are just as generic. The cheese, the Extrawurst, the Salami, the Speck, the Liptauer and the Geselchtes would take me less than half a minute to find on a supermarket’s shelf and another minute to arrange on a wooden board. Only the thickly cut Schweinsbraten looked slightly out-of-place, but I doubt this was part of any elaborate design: more likely, the cook was simply too lazy to cut them.

To be fair, my expectations were low: a place whose most advertised feature is its closeness to Vienna’s convention center simply cannot be good at Brettljausen. It is rather good at beers, however, serving quite a few sorts on draught, including my favorite Starobrno. The location is not what I would call cozy, with the passing cars creating plenty of noise, but after a couple of beers that becomes less noticeable. Even the Brettljause, to be completely honest, was not as bad as it could have been; the ingredients tasted like good supermarket stuff, and the horseradish was actually very strong (just as I like it). But eating another Brettljause at Bieriger is not what I see myself doing again any time soon.