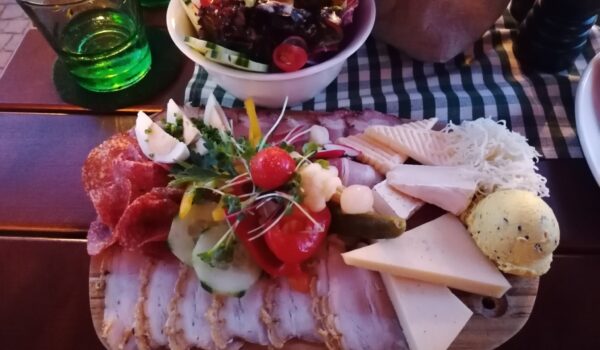 Until today, Vorarlberg remained the only state in Austria that I have not visited and whose Brettljausen I haven’t tasted. OK, not exactly true. Many years ago, I went to the Ü-lokal, a tiny and long extinct restaurant serving authentic and a bit overpriced Vorarlbergian dishes.

What at the time impressed me most was the cheese, which had a lot of taste. The closer one gets to Switzerland, the tastier cheese becomes, and you can’t beat Vorarlberg in terms of closeness to Switzerland.

Therefore, ordering my first Jause in Bregenz and in Vorarlberg in general, I expected strong cheese at the very least. What I got was one of the best Brettljausen since quite a while, easily beating all the Jausen I eliminated during my trip to East Tyrol a month ago. The Speck, Geselchtes, Schweinsbraten and Salami were all top quality and not at all supermarket-y, and the cheese was as strong as I had expected. One type of cheese anyway: the second type, a soft Brie cheese was more of a stomach filler than a taste highlight. That was fine, because the really pleasant surprise unexpectedly came from the spread, which had curry in it. So simple, it has somehow worked beautifully for me; probably I’m slowly getting tired of the Liptauer and flavorless herb spreads.

Even though it was getting dark in the tavern’s garden as I started eating, I could still appreciate the effort that went into making the Brettljause look nice by adding all kinds of vegetables and pickles. They were not for decoration only, however; there was enough of the stuff to make the salad that I had ordered in addition almost redundant.

I suppose that going to a Heuriger is not something that most visitors to Bregenz think of first (the Heuriger was nearly empty while the numerous cafes and restaurants along the lake coast were absolutely packed with people), but if you are into Brettljausen, the Marauchbund should be high on your list of the city’s must-see attractions.