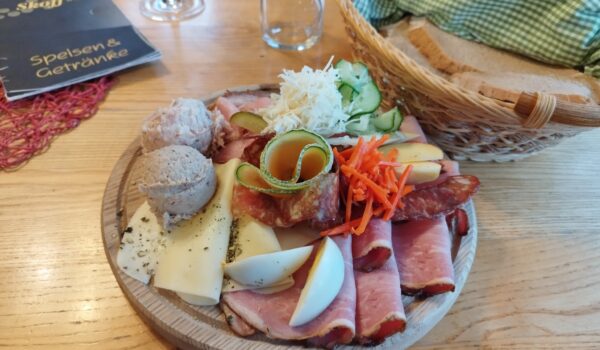 My memory is not what it used to be. I don’t remember if it was ever any good, for one thing. Neither could I recall that I had visited Buschenschank Skoff already – one year ago, in fact. When I studied the map during today’s train journey, Skoff looked like a convenient and safe place to hike to in the afternoon, considering that it gets dark very early these days. It is only as I was approaching the Heuriger that the scenery became strangely familiar, and when I climbed the neighboring viewing tower and stepped on the slightly scary transparent floor on its top, I finally decided to check to the most reliable and complete source: this very website. You see, there is something useful about these pages, even if they have no other visitors except myself.

Thanks to my one-year-old post, I dropped the initial idea of taking the more expensive thickly cut “Wanderjause” and went for the traditional Brettljause instead, saving 50 cents in the process (the prices did go up this year, but Skoff is still very cheap). It was a good decision. Although not as unfinishable as the Wanderjause, the Brettljause still had a lot to offer, but reduced the effort of cutting stuff to the minimum. A bit of cutting was still required, however – to get rid of tiny pieces of cartilage in the Schweinsbraten and to occasionally remove the hard-to-chew skin off the Geselchtes.

These were very minor annoyances, on the other hand, and did not spoil the otherwise very solid Brettljause. The Schweinsbraten was definitely the best part of it; very fat and still slightly crunchy, it clearly started its life as warm Schweinsbraten, and even by its color it was different from the standard stuff offered by supermarkets and other Heurige alike. The Verhackertes had a very pleasant and authentic taste too and fortunately was not oversalted like last year. I even enjoyed the liver spread; it was much creamier than usual and its flavor was not exceedingly liver-y. The incredibly strong horseradish was another highlight, but I had not expected anything less in Styria.

Last year I mentioned that a second visit to Skoff would be unlikely, but today I proved myself wrong and do not regret it. I can confirm what I said last time: it is a conveniently located yet very competent place that is absolutely worth visiting if you are in the Gamlitz area and do not have much time.