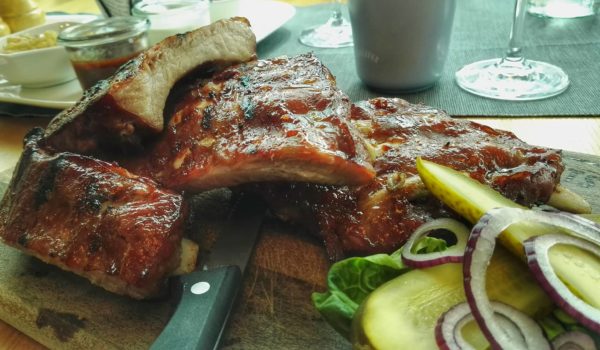 As far as I am concerned, the main purpose of a marinade is to make meat taste less of the animal that it came from. Lack of marinade results in an unpleasant “dead pig” taste, while creative marinades, like the ones used by the best ribs restaurants such as Ribs of Vienna and (unfortunately once again closed) Strandcafé can really make the dishes stand out.

Vinarium’s menu proudly says that the marinade of its ribs was devised by the grill-champion Adi Bittermann, who is incidentally the restaurant’s owner. Surprisingly, this marinade did not change the taste dramatically: the “pigginess” has definitely been toned down, but the occasional flavor reminiscent of a Stelze came out occasionally. What the marinade had managed to achieve, however, was to make the meat incredibly tender. Not only did it separate from the bones easily despite not having much fat (and no membrane – hooray!), but it also literally melted in the mouth with just a minimum chewing effort. These are the ribs I would not be afraid to try right after a painful visit to a dentist.

Bittermann serves the ribs with a reasonably good coleslaw salad (of which there could have been more), a small plate of warm beans with Speck (not really necessary), French fries (a bit dry and not exciting) and two sauces. One of them if a common garlic sauce, quite plain and too liquid for my liking. The second sauce is the real deal, however: a sophisticated and strong barbecue sauce of many flavors. It is definitely home-made and is very likable, avoiding the smoky taste of industrial BBQ sauces.

With the untimely demise of Strandcafé and the annoying tourist-ness of Ribs of Vienna, Vinarium is definitely one of the top places for spare ribs, if you are ready to travel that far from Vienna. The restaurant also excels in its other grilled dishes, such as burgers and steaks and has an impressible wine menu and even its own wine shop. Had the taste of the ribs been a bit more special, or had the quality of the side dishes been on par with the meat, I would not have hesitated to award them an even higher score. The way things are, the restaurant deserves a very strong 7 out of 10.