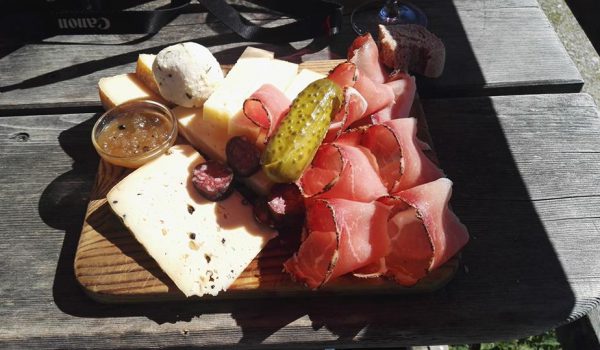 Those who visit and read this site regularly (I know they do not exist, but this sounds like a cool introduction) probably consider myself a Brettljause-processing machine, always ready to bite into any sausage/cheese mix that life throws at me, at any time of day and night. Nothing can be further from truth: more than one Brettljause a day is for me unenjoyable to the point of being impossible, and even a single Brettljause a day over a period of several days makes me struggle.

When I left the bus at the Plätzwiese at the altitude of almost 2000m (though its Italian name, Prato Piazza sounds much nicer, as in fact are all Italian versions of location names in South Tyrol) and studied the menu of the nearest restaurant, it was totally clear to me that a Brettljause was the last thing I wanted. Four Speck-heavy experiences of the preceding days were starting to take their toll. Or perhaps it was a 0.75l bottle of a very strong Belgian beer that I finished the previous night (after half a liter of red wine and before a quarter of a liter of a white wine around 1:30am, while writing three Supergoose reviews) that made my stomach say “No BJ today.” Instead, I decided to go – when the lunch time would come – for one of the Tyrolean fried egg specialties (with fried potatoes and, well, Speck).

Three hours and a long pleasant walk later, and I was at the Almhütte Plätzwiese, which had no fried eggs on the menu. It had a few polentas, but none looked too appetizing. No escape from a Brettljause then.

When it arrived, the look of it was a huge relief. Not too Speck-y – the number of slices remained reasonable – and even less Kaminwürzen-y, the board was full of thickly cut and interesting-looking cheese. There was a round cheese Knödel, and some hard pepper-spiced cheese, and a couple of other plain-looking types, all obviously coming from the local production. Best of all, the Brettljause came with a home-made horseradish/mustard jam, which improved the taste of the cheeses (and even the Speck) considerably.

One has to admit, the taste had to be improved, because without the jam the cheeses tasted of only the spices added to them, like the above-mentioned pepper. South Tyrol is amazing when it comes to pork-related stuff, but when cheese is involved, they tend to go the “Lower Austrian” way, that is, serve lots of different cheeses with no difference in their taste. I could fully experience that in the evening of the same day when I ordered a cheese plate as a dessert at the Winkelkeller. Except there I did not even get a jam.

I don’t want this to sound as a criticism of Almhütte Plätzwiese, though, because all in all their Brettljause was excellent. Better than anything I tried in South Tyrol this year (with the Brettl of the Speckstube being outside the competition). Best of all, however, you can enjoy a cozy summer terrace, a very nice service and an incredible view over the surrounding peaks. A bit more variety and taste, and this could have been a real contender for the year’s top pick.