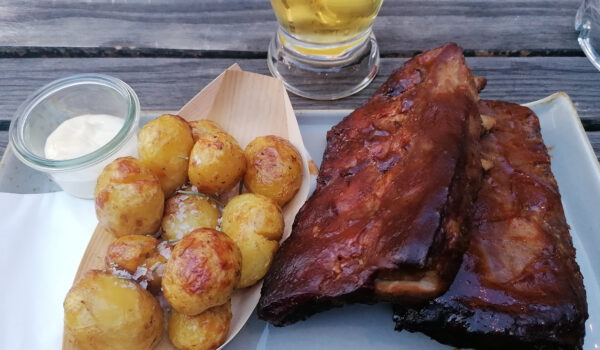 To make things clear, the Napoleon I’m talking about here has nothing to do with the restaurant that had existed at the same location until 2019, and whose spare ribs I had, for some unexplainable reason, omitted to review (to the restaurant’s benefit, probably, for I don’t have fond memories of them).

These days, the Napoleon is a “pop-up” venture of Café Landtmann, and the fantastic goose it served me last year was the reason I simply had to try their post-lockdown ribs. I’m glad I did.

To tell you the truth, the cook managed to turn the entire concept of spare ribs upside down. Normally, the ribs are all about bones. You fight to remove the bones to get to the “juicy bits.” In the new Napoleon’s case, the bones are a petty annoyance that you can shake off the meat by, well, simply shaking the meat.

This time, the main part of the dish is the meat. Rather than the bones with a bit of meat between them, the ribs of the Napoleon are thick pork steaks with some ribs inside. The meat is incredibly tender; sometimes I complain about ribs being pre-boiled, but in this case, whatever magic had been performed on the ribs before grilling them went to their benefit. Thanks to that and also a very good marinade, the ribs were tasty enough by themselves to make sauces unnecessary. The cook probably recognized that fact and offered only one sauce – a thick but not too strong garlic one. Personally I would have preferred a hot BBQ sauce, but as I said, the ribs did not need one.

The only grumble I have is that because there was so much meat, the bits of it that were the furthest from the bones contained fat and nasty tiny bones of their own. If one is not careful, these hidden bones can damage one’s teeth. Apart from that, the offering of the Napoleon was both tasty and refreshingly different.