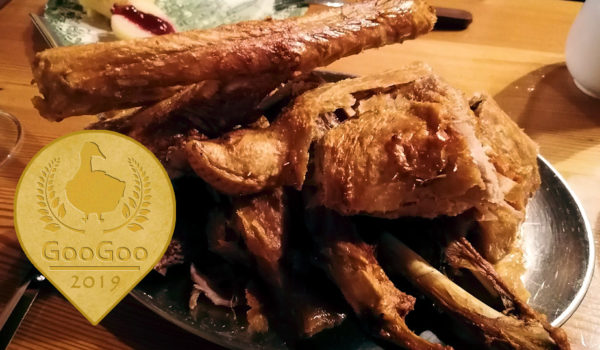 Another goose season is over. It is not that I did not try to extend it, spending the last few days desperately searching for the restaurants still serving the majestic birds, possibly under the name Weihnachtsgans rather than Martinigans. However, my final three attempts have all failed miserably. In the first case, despite my advance reservation, the restaurant messed it up and left me with a roasted duck instead of a goose. (I seriously suspect the real reason was because I booked a table for two, and they did not want to purchase a whole goose just for two people.) On the other two occasions, the dish was still on the menu, but the waiters informed me that they had no portions left. Maybe it is for the best.

The end result is that I had only 17 portions this season, compared to 19 last year. OK, strictly speaking, I had more, for I visited one location (Mariahilferbräu) twice, but the second time I arrived so full that could not even manage a half of the served portion.

Generally speaking, it was a year of satisfactory geese, with the average score climbing to 6.1 from the last year’s 5.7. To a large extent, this increase was thanks to the two truly exceptional geese I had the pleasure of eating: the “family goose” at the Heuriger Oleander in Burgenland and the 2018’s champion, the mega-goose of Schiefer Giebel. While the Oleander can be called the discovery of the year and visiting it every season is likely to become a tradition, the Schiefer Giebel – a tradition already – has managed to surpass itself this time, earning the perfect score, 10 out of 10, for the first time in the history of this site. Well done and enjoy your deserved GooGoo (“good goose”) award!

Mariahilferbräu and Gasthaus Wild both deserve honorable mentions for serving seriously good Martinigansl without prior reservations. It was my first experience at the Wild, but it is satisfying to see that the Mariahilferbräu manages to maintain high quality season after season.

The greatest disappointment of the year came from Lugeck, the GooGoo winner of 2016. Unlike the old days, the goose it served this year was unexceptional in taste and poor in presentation. All in all, a lazy job not worth the premium price.

It was still better than the two disasters that were the Martinigänse of the restaurant Lehner in Linz and Vienna’s tourist eatery Bieradies. To be honest, the taste of the former was worse – scandalous, one-should-call-the-authorities kind of bad, in fact – but at least there was a sign that the goose had had some merits at one point in time before its expiration date. The Bieradies’s goose, on the other hand, was so hopelessly pathetic, that no amount of imagination can turn it into anything worth a second chance. It is a perfect candidate for the PooGoo (“poor goose”) award, in other words.